Colin Powell vs John Sununu: 'Oh, So Now It's A Black Thing' 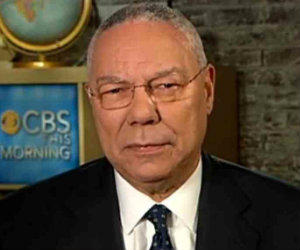 There was never anything wrong when whites voted for whites in 100 percent of the presidential elections until 2008. Now, there are complaints of blacks voting for blacks because they are black? Now, it’s about race, although it was never about race when it was white candidates?

This topic of conversation has taken on new light since former Secretary of State Colin Powell stated he would be voting for President Obama once again. For those who don’t know, Powell was the most recognizable black Republican when he was the 65th United States Secretary of State, serving under President George W. Bush from 2001 to 2005.

It’s amazing that this man, who was always viewed as a very intelligent man when he was serving in the White House and even when he was a four-star general in the Army, is now being questioned on his choice. A Mitt Romney adviser, former New Hampshire Gov. John Sununu, suggested that this highly regarded individual, who was loved by the Republican party, is endorsing Obama only because they are the same race.

“Frankly, when you take a look at Colin Powell, you have to wonder if that’s an endorsement based on issues, or whether he’s got a slightly different reason for preferring President Obama,â€ Sununu said on CNN.

When asked to clarify, Sununu then stated, “Well, I think when you have somebody of your own race that you’re proud of being President of the United States, I applaud Colin for standing with him.â€

Oh, but it’s different rules when it’s a white politician? And they say racism isn’t as prevalent as it’s been in the past? No, racism is here, never left and is disguised and poorly at that.

This reminds me of when I was on jury duty about 20 years ago. I was sitting on a jury who had to decide if someone being accused of causing a car accident was at fault. During the deliberations, I made some key points to the group and everyone agreed with my theory; and this older gentleman loudly applauded what I had stated and called me very intelligent for being the only one to realize something that would be instrumental in our decision. Fast forward later, the majority of people voted to award the victim an amount in the excess of $1,000,000 for her injuries and to help defray the costs of future medical care. The same man who complimented me earlier thought that amount was too high and all of a sudden, I’m the dumb one because he didn’t agree with our final determination.

This is a prime example of a similar situation regarding Sununu’s comment. He is great when he is seeing our point of view, but, disagree and you’re just dumb for making the endorsement you made.