Itâ€™s All About the iPhone 7 and AirPods 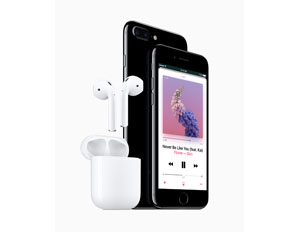 Apple finally announced the iPhone 7Â at a special event in San Francisco this week. The iPhone 7 and iPhone 7 PlusÂ are splash, water, and dust resistant, with a new ‘Home’ button that is capable of providing precise, tactile feedback as you press. They will also ship in a new color–jet black.

Apple says the new Retina HD display on these phones is the best yet, with support for 3D Touch and a 25% brighter display. The A10 Fusion processor reportedly provides the longest battery life of any iPhone ever, making the newest generation of iPhones two times faster than its predecessor, the iPhone 6. There is also a new camera system that includes 12MP wide-angle and telephoto cameras, with a digital zoom up to 5x; a FaceTime HD option; and optical image stabilization, among other features. Additionally, these iPhones come complete with the latest iPhone software, iOS 10.

However, many were taken by surprise when it was announced that the latest iPhone would not ship with a 3.5 mm audio jack. Instead, it will use lightening-compatible or wireless headphones.

Thus, Apple announced the release of AirPods–new, wireless earbuds for the iPhone. Once placed in your ears, AirPods automatically connect with your iPhone, iPad, Apple Watch, or Mac. They canÂ also function as a microphone.

Although the iPhone 7 and iPhone 7 Plus will not have a 3.5 mm audio jack, they will comeÂ with an adapter for legacy headphones. The removal of 3.5 mm audio ports seems to be the de facto trend in smartphones, as Motorola also built its latest Droid phone without one.