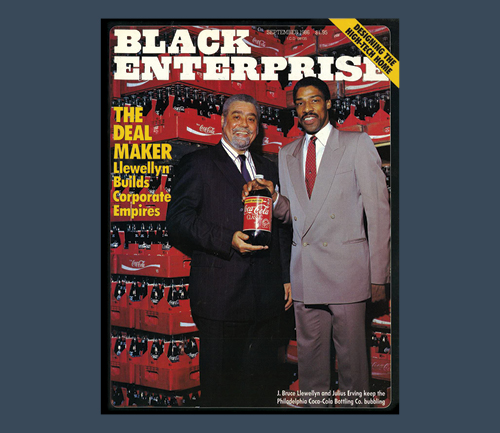 A consummate dealmaker, the late Llewellyn created monolithic companies through innovative financing, groundbreaking partnerships, and val-ue-inducing turnarounds. In 1969, when the towering entrepreneur acquired Fedco Food Corp., a profitable South Bronx grocery store chain, through a leveraged buyout, he was among the first to engage in that revolutionary type of transaction. In 1985, he partnered with Julius Erving and Bill Cosby to purchase Philadelphia Coca-Cola Bottling Co., the first Black-owned soft drink bottling franchise. Due to his leadership, it became the sixth-largest Coca-Cola bottler and third-largest Black-owned business. He also made his mark with another group of Black investors, launch-ing Queen City Broadcasting, which acquired a Buffalo, New York-based ABC affiliate and became one of the largest Black-owned televi-sion networks of its time.