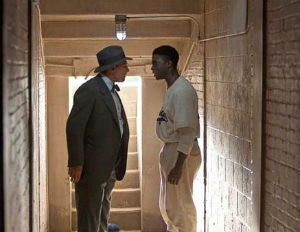 TheÂ Jackie Robinson biopic, 42, “overperformed,” according to Deadline, doing much better than expected and was the top grossing movie over the weekend at 27.3 million.

The spectacular debut is a record for a baseball movie topping the $19.5M debut of 2011â€²s Moneyball.

Exit polling showed the audience composition wasÂ males 48%/females 52%; under age 25 was 17%, age 25 and up 83%, and the main reason forÂ attending the movie was subject matter 84%. A Warner Bros exec told Deadline: “While we do not poll race breakdown,Â I can tell you we performed extremely well in all the large urban markets. ButÂ the highest grossing theaters were the country’s most commercial screens.â€

Today is MLB’s Jackie Robinson Day where every player wears Robinson’s 42 and Deadline predicts that grosses for today could “stay level” because of the attention.

Thomas Tull, the movie’s producer, told Deadline that he relied on Robinson’s widow Rachel Robinson to help with the movie. “Her voice helped us with authenticity. That was the person who lived it,â€ Tull said. “And that was a really important story for us to tell.â€