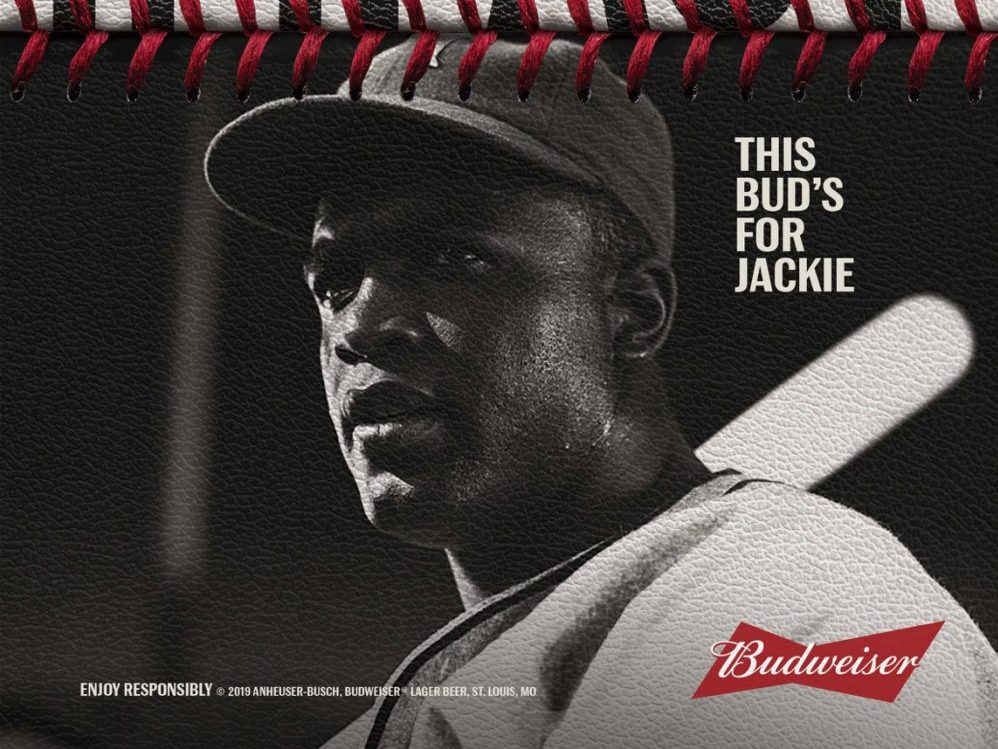 Years before integration was legal in the United States, Jackie Robinson, at 28 years old, changed history by stepping onto Ebbets Field in 1947 and breaking Major League Baseball’s more than 50-year color barrier. The baseball legend also used his platform to advocate for the civil rights of African Americans well after his retirement.

In honor of the 100-year anniversary of Robinson’s life, Budweiser partnered with the Jackie Robinson Foundation to create a short film called Impact, produced by Oscar Award-winning director Spike Lee and narrated by Robinson’s daughter, Sharon Robinson. According to Budweiser reps, the film was inspired by Robinson’s quote, “A life is not important except in the impact it has on other lives.” The beer company has also raised funds in support of the Jackie Robinson Museum, which is scheduled to open in New York City in December. [Watch Budweiser’s Impact film below.]

Black Enterprise spoke with Sharon Robinson about her father’s impact, working with Budweiser, and being the daughter of an American hero.

BE: How was your experience working with Budweiser on this film?

Robinson: It was an incredible experience working with Spike Lee and his team and the Budweiser Group. Everybody was very enthusiastic and creative in finding ways to keep the campaign contemporary while celebrating the accomplishments of Jackie Robinson and the breakthrough from 1947. We are thrilled they partnered with us; they are providing us great support with our museum. Spike was just a dream to work with. I was very honored that he asked me to do the voice for the Impact film.

BE: What was it like growing up in a baseball household?

Robinson: Well, I wouldn’t say I grew up in a baseball household. I was actually 7 when my father retired. My younger brother was about 4-and-a-half, and my older brother was about 9-and-a-half. We grew up more in a civil rights household. We knew our dad had played baseball, we had a trophy room, and people told us stories wherever we went. We really focused, as a family, on social changes during a time when so much was happening and eventually found our role as a family in the civil rights movement.

BE: Aside from being a trailblazer in the world of sports, what were some of Jackie’s contributions off the field?

Robinson: My dad retired in 1957 after 10 years. He was a vice president at Chock Full O’ Nuts but he had a deal with them that he can work in the civil rights movement and he was free to travel, he was able to have the time off to have a dual role. So, initially, he was fundraising for the NAACP and he would travel across the country raising money. He would travel south and we, as a family, intergraded [the] neighborhood we lived in; my brothers and I integrated our schools in Stanford, Connecticut. He would come home and share stories with us at the dining room table, and we would watch the news together as the civil rights movement was unfolding. In 1962, my dad would go on marches, he marched with Dr. King, he marched around jobs, he did a lot of that kind of activism.

Another key role my dad had played was [after] the bombing of the churches. My dad would go down and visit and help raise money to rebuild these churches. In fact, Dr. King had given him the entailment to raise money for the bombings across the country. He visited dad in Albany, Georgia, where there have been a couple of bombings and Dr. King had asked him if he would take that on as one of his fundraisers.

In 1963, things sort of changed in our family. Dad came home and said, ‘We’re going to have a family mission in finding work that you love.’ That’s when we started doing jazz concerts at our home to raise money for the civil right movements. Our very first jazz concert came after the work in Birmingham, Alabama; we raised bail money for the marchers who have been jailed. We had our second jazz concert in September right after the March on Washington. That’s when we, as a family, started doing activism, it became a family mission. That’s why it was so easy after dad died, we moved from our work in the civil rights movement to starting the Jackie Robinson Foundation and gearing our efforts toward education and leadership development.

BE: What are some of the recent activities going on at the Jackie Robinson Foundation?

Robinson: Currently we have almost 240 scholars who receive financial support for college and have mentorship support throughout their college years. We bring them all to New York for about four days in March; they take mentoring to another level, they attend workshops, go to cultural activities throughout NYC, and it cumulates at our annual Gala, where they dress up and play a role in the program itself and the leadership component. We just completed that networking weekend, it was great. Our alumni also participate in that conference, they also help with mentoring with scholars during that time.

BE: What should we expect to see at the Jackie Robinson Museum once it opens?

Robinson: We will we certainly see his baseball career in the museum; none of this would have happened if he did not have this tremendous career that created change within the sport and within the country. That part of the legacy was definitely not lost as we were children, it was very much there. In the museum, there will be a section on baseball accomplishments and ways kids can interact and learn how to slide, steal a home run, [along with] educational activities around baseball. What we are really hoping is to challenge young people to think about issues of race, diversity, globalization, finding your voice, all of that will be a large part of what we are going to be doing at the museum. So it’s really helping them move from Jackie Robinson in the past to what is happening in their lives, which is exactly what impact does: It doesn’t just stay in 1947, it shows what happened in 1947, continues to impact America today.

BE: What is the impact you want the Jackie Robinson Museum to have on the public?

Robinson: The impact we are hoping is that we will help children lift their voice against discrimination of all kinds and we will support that in that effort and show them our father was an activist as well as a baseball player and how he used his fame to impact others.

Sharon Robinson’s answers were edited for brevity and clarity.