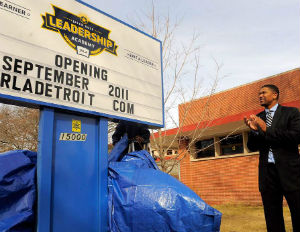 It was late October of 2012 when Rose correctly predicted that James Harden was going to be traded by the Oklahoma City Thunder. On the next Jalen Rose Report, Mr. Jacoby went all Rondo on the mic.

Mr. Rose broke into his trademark opening. “Got to give the peopleeeeeee … GIVE THE PEOPLE WHAT THEY WANT! GOT TO GIVE THEM WHAT THEY NEED!!!â€

“Yes! The NBA is fantastic and I am so glad the league is back.â€

“It is happening. The league started really coming back into the forefront late Saturday night — James Harden dealt to the Rockets. When you got this news what was the first thing you thought of?â€

“I need to be Miss Cleo, because I just predicted it on our NBA show.â€

“The first thing I said was that James Harden would be traded from the Oklahoma City Thunder.â€

Ms. Hussein was watching the night Rose, emboldened by Mr. Harden’s refusal to sign a 4-year $55 million deal, predicted the star guard was about to be shipped.

“I remember when he said it. I was just sitting on my couch, thinking ‘Oh, Jalen, they’ll figure out a way to pay him … â€

It’s why Mr. Simmons paused during the preview of the Charlotte Bobcats when Mr. Rose predicted that Michael Jordan would come out of retirement and play one game this season.

What separates Mr. Rose from his peers is perhaps best described as a succinct knowledge and understanding of the type of alternative content people are interested in, aside from x’s and o’s and analysis of the games. It’s evident on topics Mr. Rose expounds on — pregame rituals (naps, meals), financial pressures rookies face, to being on the court when Kobe Bryant scored 81 points.

“He’s an epic storyteller,â€ said an insider at ESPN.

And, really, it’s no wonder: Mr. Rose, very early on, understood the entertainment value he brought as a freshman at Michigan. They filled gyms from Lansing to West Lafayette. They wore long shorts, cut their heads bald and forever connected hip-hop culture and basketball; it’s now a world where you don’t have one without the other.

From court vision, to a vision for the future, his basketball career could be interpreted as a series of calculated risks.

Mr. Rose captured the imagination of a generation with his style of play. A smooth, tall lefty point guard who modeled his game after Magic Johnson; he eventually developed a post-game, but it was taking a chance. It was a risk, in 2002, to tell a reporter from Fox Sports Net that he took money from former Michigan booster Ed Martin, who was facing federal conspiracy charges. That’s to say nothing of his outspokenness as a Michigan player,

Mr. Rose, however, does not consider those “risks.â€

“In 2011, Detroit Public Schools said its 2010 graduation rate increased to 62 percent and its dropout rate declined to 19 percent,â€ he wrote earlier this year for the Huffington Post. “These numbers, which are an improvement since 2009, are dismal. Detroit needs and deserves better schools to provide more opportunities for its children, and its workforce.”

“The Jalen Rose Leadership Academy is a success story that will one day bear replication; creating educational and professional opportunities in Detroit is important and necessary,” Mr. Rose said. “And it’s not, as some funders would have you believe, risky.”