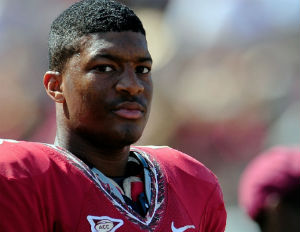 Heisman Winner and Florida State University Quarterback Jameis Winston has been cited for allegedly taking seafood from a grocery store in Tallahassee, Florida without paying.

Winston who also plays baseball for the University has been suspended by FSU’s baseball team.

According to a Florida Sheriff’s department, Winston allegedly walked into a Publix store near F.S.U, ordered about $32 worth of crab legs and seafood and then walked out without paying. He reportedly told Sheriff’s deputies he forgot to pay. While he is not under arrest he has been ordered to serve at least 20 hours of community service.

RELATED: NFL Invests in Teaching and Educating Athletes on Entrepreneurship

Winston won the Heisman Trophy last year, after a Florida prosecutor declined to press charges over a woman’s allegation that he raped her two years ago. The prosecutor maintained that authorities did not have probable cause to arrest Winston over the incident that took place in 2012. Winston says the sex was consensual.

USA Today is also reporting that “Last November, the Associated Press uncovered city records that showed Winston and some teammates were questioned by police in regard to a BB gun battle one year earlier and that he had been accused by a Burger King employee of stealing soda from the restaurant last July.”

It is still unclear what impact this latest alleged lapse in judgment and Winston’s other brushes with the law will have on his stock come draft day.