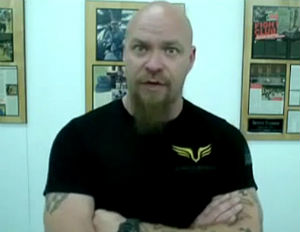 After the massacre in Newtown, Connecticut last month, President Obama instituted a task force lead by Vice President Joe Biden to come up with policy proposals to deal with gun violence.

James Yeager runs Tactical Response, a Tennessee company that trains people in weapon and tactical skills. In a video posted on YouTube and Facebook, Yeager describes President Obama as a “dictator” and claims that tighter gun control measures will result in the next civil war. The CEO posted a ranting video online in which he claims he will “start killing people” if President Obama uses his executive powers to introduce tighter gun controls.

The White House is considering more expansive measures to tackle gun violence than simply reinstating a ban on assault weapons and large magazines. Biden’s working group will consider initiatives such as a national database to track sale and movement of weapons and universal background checks for gun buyers.

Yeager, a former police chief, protective services contractor in Iraq, and owner of two companies that provide tactical weapons and training to police and military units, recently edited the video he put up on YouTube to not include his threat to “start killing people.”