Comedian Jamie Roberts Does Comedy With A Purpose 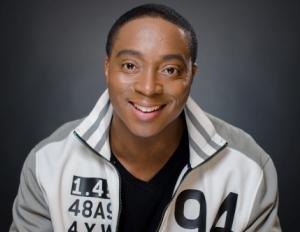 Comedy heals the soul and it also makes you laugh. We come across humor on a daily basis and it, at times, brings us out of a bad mood or a lifeless funk, so, it is indeed needed. As we all know, comedy is a big business these days and most comedians are now their own brand and some do more than just comedy, as making people laugh is their official business. Jamie Roberts, the brand, makes it his business to be funny, but, it’s his humor that is his business.

BlackEnterprise.com took the time to look beyond the laughter and speak with the young comedian about how he handles his business, his charitable goals and whose blueprint he’d “borrow” from, if he could.

BlackEnterprise.com: How long have you been doing comedy professionally and how did you get into it?

I have been doing comedy professionally since 2004. I pursued comedy after attending a show with my brother and thinking I could do this. I was always the class clown and funny guy in the circles so I gave it a shot. My first time performing I won the “Funniest Person From the Suburbs,” awarded by Standup NY.

What aspirations do you have as far as taking your comedy to a different level? Are you a writer, do you just do stand up, what is it that makes you happy when you do comedy?

I want to be recognized as one of the top working comedians in the entertainment business and I’m on that path. My brand, Jamie Roberts, is growing in the comedy world as not just a standup comedian but as one of the best hosts in New York City for all types of events. The ability to interact with people and have them laugh at your point of views is what keeps me going and makes it all worth it when I’m on stage.

You are the founder and executive director of Comedy With A Purpose, could you explain what this is and your future plans for it?

Comedy With A Purpose is a company I started to address the more serious issues in life but adding some humor to topics people sometimes have a hard time talking about. With the company, we have been able to educate, entertain and raise funds for organizations across the U.S. We are now working on a national tour for The One Night Stand Comedy Tour which will target college students and educate them about the importance of practicing safe sex.

Since comedy is your career, how do you handle the business side of it?

I graduated from Hampton University with an accounting degree, so the business side of entertainment comes natural to me. It all boils down to discipline and routines. It is very important to understand even though you are an individual, you are still a business with the ability to grow as a business.

Is there a comedian that you feel has/had the blueprint that, if you could, you’d “borrow” from? And if so, who and why?

The blueprint that I admire the most is the one Chris Rock has laid out. He is a great standup comedian, writer and can host any type of event. He has been featured in films, directed and written films and still knows how to be relevant. That is a career that I am working towards.

Do you have any other plans in terms of the business of comedy?

I am currently shooting my on- hour special August 16 in Port Washington, New York that will be shopped to NetFlix, Hulu, and other media outlets. At the present time, I host two weekly shows that we are taping as well to show the newer untapped talent here in New York City.