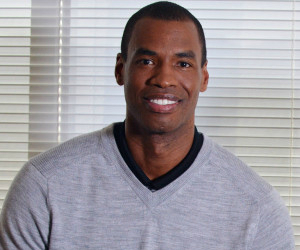 As the first openly gay NBA player Jason Collins continues to speak, he is slowly expressing his feelings about his relationship with former WNBA player, Carolyn Moss. The two were together for eight years before he decided to call off wedding plans in 2009. The breakup left her heartbroken and confused.

He opens up about the relationship on “Oprah’s Next Chapter,” while struggling with his sexuality and explaining that he was still working through several different emotional stages that prevented him from accepting the truth about himself.

He states, “It was, deep down, ‘Jason, you can’t go through with this,'” he remembers thinking. “‘You’re going to be ruining her life and your life, and leading to a life of unhappiness.’ I’m still trying to process it, but ultimately, I [made] the right decision.”