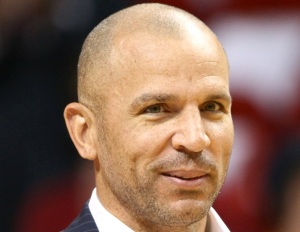 Jason Kidd is now on his 4th team in 4 years!

According to ESPN, a deal has been made to bring Jason Kidd to the Milwaukee Bucks as coach Larry Drew is fired by the new owners of the NBA franchise. It was reported over the weekend that Kidd went to Brooklyn Nets management requesting a bigger executive role with the organization and was quickly rebuked, setting up the opportunity for Kidd to speak to the Bucks about their coaching position.

Brooklyn will receive draft picks in 2015 and 2019 from Milwaukee as part of the deal. Sources said Bucks co-owners Wes Edens and Marc Lasry met with Kidd on Friday in New York City before the NBA draft after asking for and receiving permission to talk to the now former Brooklyn Net coach.

Kidd, who retired a little over a year ago after playing with the New York Knicks, had previously played for the Dallas Mavericks before joining the Knicks and then campaigning for and getting the head coach position in Brooklyn.