Jason Sadler Auctions His Name to a Business, Becomes JasonHeadset.com 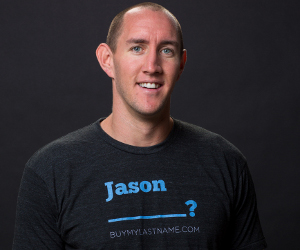 Starting January 1st, Jason Sadler will become Jason HeadsetsDotCom after the Florida entrepreneur came up with the idea of auctioning off his last name for the whole year of 2013 to the highest bidder as a way to raise startup capital.

This is not Mr. Sadler’s first foray into guerilla marketing. In 2009 he launched IwearYourShirt.com where companies paid him to wear a t-shirt featuring their logo for days or weeks. He used social media sites to get word out about his clients, tweeted about the brands and made video shows while wearing the t-shirts. By 2011 he was earning $250,000 a year, had a staff of 5 people and major companies such as Starbucks, Nissan and Zappos as his clients.

As far as his latest idea to auction off his last name, he admits it’s a mixture of brilliance and insanity.

â€Tons of people have told me I’m an idiot for trying to sell my last name,â€ Sadler said.

He organized an online auction on BuyMyLastName.com and invited brands to take advantage of this very unique promotional opportunity.