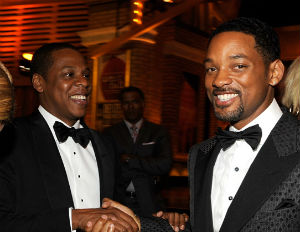 Mega-stars Jay Z and Will Smith have teamed up to co-produce a six-hour HBO miniseries about Emmett Till, a teenager whose death in 1955 served as a catalyst for the civil rights movement, according to Deadline Reports. At 14 years old, Emmitt Till was brutally murdered after allegedly flirting with a white woman in Mississippi in 1955. Two white men were tried for murder, but an all-white, male jury acquitted them.Â Months after Till’sÂ death, Rosa Parks, currently recognized as the Mother of the Modern Day Civil Rights Movement, refused to give up her seat to a white bus rider.Â “I thought of Emmett Till and I just couldn’t go back,â€ she said.

The dynamic duo are no strangers to the big screen. Previously Jay Z and Smith partnered to produce the Fela Kuti-inspired Broadway musical Fela! as well as the 2014 film remake of Annie.

The untitled mini-series, now in active development, is described asÂ an immersive and in-depth exploration of the Emmett Till story, according to Deadline. The Emmett Till story has been the subject of a 2003 feature documentary, a PBS program, and aÂ 60 Minute feature.

[Below: Watch the 60 Minute Feature]