Racism in the Workplace: How to Deal 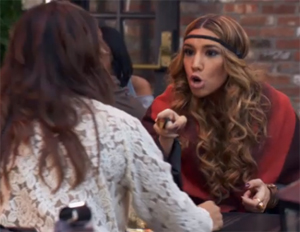 On Monday, viewers watched as tensions erupted between Love and Hip Hop New York castmates Jen “the Penâ€ Bayer and Raqi Thunda after an uncomfortable on-air audition. After Jen told Raqi she no longer wanted to work together, Raqi told Jen to “have fun trying to get hotâ€ to which Jen replied, “I’m white, honey. It will get it done.â€ While she and the Puerto Rican radio personality both played the race card and threw insults at each other during this rocky exchange, Jen’s comments about “getting on with her whitenessâ€ left her open to public backlash, with some calling her a racist and accusing her of boasting of white privilege. She has since denied the allegations, citing anger and misunderstanding in the aftermath.

The jury’s still out whether the remarks were racially offensive or not, but the truth is, racial discrimination still exists in many aspects of life, including the workplace. In 2011, according to statistics, the “most popular” form of employment discrimination in the U.S. was racial discrimination. The US Equal Employment Opportunity Commission (EEOC) received a total of 35,395 complaints nationwide that year. The number of complaints in 2011 is slightly higher than that of 2010 (35,890).

Experts recommend keeping a diary of events. Document any incidents of racism that happen to you in the workplace or that you witness. Write down names, dates, times and detailed descriptions of what occurred. If you have physical evidence, hold on to it in a secure place.

Don’t ignore it. Report each racist incident that occurs to your supervisor, union steward, or human resources. If the employer hasn’t rectified the issue within a reasonable amount of time, the next step would be to notify the EEOC, an agency designated to regulate issues of discrimination in the workplace.

Talk to colleagues who might be suffering the same problems. If they are, work out together what you want to do about them. Talk to friends who might have suffered similar problems where they work. It’s always helpful to share a problem and trying to cope with pressure on your own can be particularly stressful.

Do you think Jen was being racially insensitive? Or were both women at fault? #SoundOff and follow Jamie on Twitter @JayNHarrison.