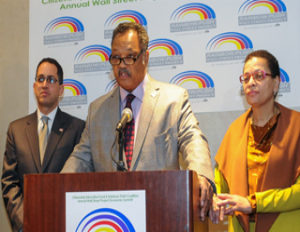 The immediateÂ followup conversation to the luncheon was the two-part panel, “Thinking Outside the Box to Improve Minority Hiring.â€ Part one began with a chat between Janice Parks, McDonald’s senior director of global inclusion and community engagement, and Robert F. Smith, chairman and CEO of Vista Equity Partners. The conversation focused on Smith’s unique efforts to find talent by giving aptitude and personality tests.

The company trains new hires for six months and boasts a low turnover rate. “I’m in the intellectual property business and my job is to find the smartest people,â€ heÂ added. “Three hundred thousand didn’t take the test, [but] 125,000 did. That’s what I look at.â€

Part two of the minority hiring discussion was a panel moderated by McDonald’s global chief officer, Pat Harris, and it focused on the diversity inclusive initiatives of the State of New York and corporations including Nationwide, Comcast, and Citi. “I can’t see diversity unless everybody around me in the C-suite has those same expectations,â€ said Gale V. King, Executive VP and Chief Administrative Officer of Nationwide, one of BE’s 40 Best Companies for Diversity. “You have to have some personal and professional credibility. And you have to have courage. You have to be intentional.Â  Why be in the room if you’re not going to ask, ‘Why do we not have diversity in this area?’â€

When asked why more companies don’t make diversity a priority King added, “I think it’s complacency and fear. And it’s on all of us to say, ‘You need to change and have to change.’â€

Bright signs of King’s point showed promise during Part 1 of the panel, “Access to Capital: How to Secure Venture Capital for Your Business.â€

“I became a student of the research and then I got it, which is why I’m here all day,â€ said Jeanne Sullivan, who has $400 million under management as the co-founder of StarVest Partners.Â “Being a woman in the business, we realize gender bias starts early in the second and third grade. You want to change the game? Do what we do. Form your own tribe and invest behind women and people of color because we’re looking through a different lens.â€

The Wall Street Project wrapped a strong day one with the NY Tech Meetup, featuring demonstrations of new technology. Last night’sÂ Citizenship Education Fund Opening Reception was hosted by actor and comedian Mark Curry and honored founders of Silicon Harlem, Bruce Lincoln and Clayton Bank, along with Van Jones, co-host of CNN’s Crossfire, and president and co-Founder of Rebuild the Dream, #YesWeCode.

The Wall Street Project Economic Summit continues at the Sheraton New York Times Square Hotel today. Follow hashtag #WSPES2015 for social media updates on the event and visit us for details on panels, insights and more.