Jesse Jackson to Microsoft CEO, Board: â€œSeek Out Qualified Blacks and Latinosâ€ 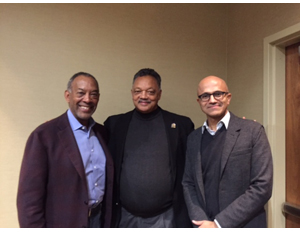 The Rev. Jesse Jackson met with Microsoft CEO Satya Nadella and the company’s board on Wednesday, urging further action on diversifying the tech giant.

[Related:Â Multi-Culti Coalition Demands a Seat at the Table During Tech Diversity Forum]

At Microsoft’s shareholder meeting in Redmond, WA, Jackson first offered praise to Microsoft for its efforts in diversity and inclusion.

“Your leadership is proof that talent and excellence comes from all over the world –Â from Florida A&M University, an HBCU, to across the seas in India,â€ he said. He also lauded the appointment of two women to Microsoft’s board, calling the board “one of the most diverse in the industry.â€

However, Jackson urged Redmond to step up efforts even further. “What holds back our talented Black and Latino startups is the lack of access to capital –Â so we would appeal to Microsoft to seriously consider a major access to a capital program aimed at these talented start-up entrepreneurs.â€

Calls for increasing diversity in Silicon Valley and in the entire technology field have been steadily increasing as some of the largest tech companies have been publicly releasing diversity information on their employees and their boards. From research by Jackson’s PUSH organization, last year, there were only three African Americans sitting on the boards of the largest companies in tech. Since then, Microsoft, Apple, Square, Salesforce.com, and other companies have appointed African Americans to their boards.

Former Symantec CEO John Thompson is one of the few blacks to head a tech company’s board as the chairman of Microsoft’s. Redmond has other African Americans in leadership positions including Fred Humphries in government affairs, Tony Prophet in marketing and education, Toni Townes-Whitley in worldwide public sector, and Melvin Flower in audits.

Despite the increase in diversifying its ranks, the female workforce suffered a decline from 29% in 2014 to 26.8% this year, largely due to “the restructuring of our phone hardware business,â€ wrote Gwen Huston, general manager, diversity & inclusion, Microsoft, in a blog post.

“We need to build on the areas where there is some early momentum, address areas where we’re not yet seeing real progress, and above all, remain focused on the importance of increasing diversity and building a more inclusive culture at Microsoft,â€ Huston wrote.