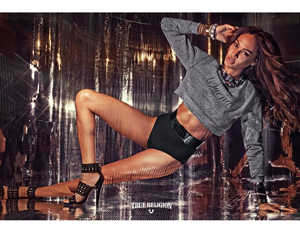 Supermodel Joan Smalls is taking a walk on the other side of the runway. Smalls, who has strutted for top fashion houses like Alexander Wang, is adding designer to her rÃ©sumÃ© via her capsule collection with denim brand True Religion.Â The collection, which includes 16 pieces, “features raglan sweatshirts (in both a croppedÂ and boyfriend variety), super-skinny high-rise denim and sporty underthings,” according to Fashionista.com.

[Related: Girls Auto Clinic: Educating and Empowering Women, One Car At a Time]

The inspiration for the collection derives from Smalls’ everyday style staples and takes on an urban athleticwear aesthetic. Consumers can find the collection at True Religion and Nordstrom stores, priced between $58 to $238.

In the campaign video, shot by Steven Klein, Joan Smalls fiercely moves and dances in pieces from the design collaboration. “I think it was always an idea to have movement and make it really fun. I just didn’t know what I was walking into,” she tells Fashionista.com. “But I adore Klein, and he’s like, ‘Joan, pick a song you like and just go for it. Let’s do it a couple times’.”

Aspiring models can learn a lot from the “YoncÃ©” video girl, and start adding more than headshots to their professional portfolios. While Joan Smalls’ $3 million dollar earnings in 2014 made her one of the highest paid supermodels last year, this is not the norm for most. According to ABC News, in 2010, professional models signed to an agency made an average $42,650 for the year. In 2008, only 2,200 models were employed by agencies, and the number is expected to just slightly jump (2,600) by 2018.