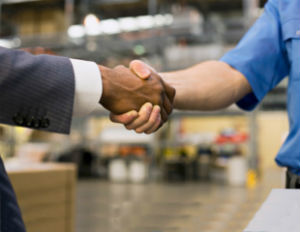 A recent press release by the Center on Education and the Workforce has revealed the telling news that for the first time, four-year college graduates make up a larger share of the workforce than workers with a high school diploma or less.

Out of the 11.6 million jobs created in the post-recession economy, 11.5 million went to workers with at least some college education, according to newly published research from the Georgetown University Center on Education and the Workforce (Georgetown Center). Of these jobs, 8.4 million went to workers with a bachelor’s degree or higher. America’s Divided Recovery: College Haves and Have-Nots reveals that employment of workers with a high school diploma or less only grew by 80,000 jobs in the recovery.

“The modern economy continues to leave Americans without a college education behind,â€ said Anthony P. Carnevale, director of the Georgetown Center and lead author of the report. “For decades, we’ve witnessed this growing split that parallels the divide in the current electorate.â€

You’re probably wondering how this is happening given the fact that unemployment is down and the job market has steadily been recovering post-recession. Though this may be the case, many of those who had jobs prior to the recession (which heavily affected blue-collar and clerical jobs) are finding that the economic recovery has primarily benefitted those seeking managerial and professional jobs.

According to the study, the recession and recovery have hastened a long-term change in the composition of the American workforce. In 2016, for the first time, workers with a bachelor’s degree or higher are a larger proportion of the workforce (36%) than those with a high school diploma or less (34%). Workers with more than a high school diploma but less than a bachelor’s degree, who are typically employed in middle-skill occupations, comprise the remaining 30% of the workforce.

The largest occupational group in the American economy, routine office and administrative support jobs, lost 1.4 million jobs during the recession and recovery, primarily because of automation and the rise in digital information storage. These occupations were a primary source of jobs for workers with a high school diploma or less, in many cases, so the decline of these jobs has hit less-educated workers particularly hard.

“While it’s reassuring to see the economy back on track, we can’t ignore this tale of two countries with vastly different economic realities for those with and without a college education,â€ said Tamara Jayasundera, senior economist at the Georgetown Center and co-author of the report. “Fewer pathways to the middle class for those with less education will continue to reshape the labor market and American culture as we know it.â€