John Liu: Lack of Minority Participation in City Contracts is a Plague 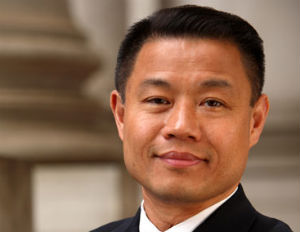 As Comptroller of the City of New York, John Liu’s policies of inclusion and transparency has led to significant city bond underwriting deals for minority owned investment banking firms — something previously reserved for the global houses. A hopeful in the city’s 2013 mayoral race, Liu cites hopes to bring that inclusion into other branches of the city’s government.

BLACK ENTERPRISE Editorial Director Alan Hughes met with Liu at the Comptroller’s offices in lower Manhattan. Here’s what he had to say:

BlackEnterprise.com: The last time we spoke, we talked a lot about the cities bonded writings and your focus on making that pool much more diverse. I understand you’ve had some successes then and the needle has moved in a good direction. So tell me a little bit about that.

John Liu: When I first took office I was just shocked at how little participation there was of minority finance firms and I was proud that we had opened up the process. Instead of going to the same companies who rotate selling our cities bonds, in the summer of 2010, which is what we spoke about, we opened up the process, got proposals from many more companies than the usual four that rotate, and evaluated all of the proposals and a new company came out on top. That company was a company very few people had heard of but they turned out to be a new company that was also an African American owned company and had I not opened up the process, we would still have the big companies taking turns. They wouldn’t necessarily be doing the best job they could for the city taxpayers and we wouldn’t have been able to give new companies a chance. So we are continuing along those lines, we have just finished an [request for proposal] for the underwriters of all city bonds and this time we have more minority and women underwriters than ever before handling the different sectors of bond sales that the city engages in.

With regards to minority participation, do you set a goal? Do you say ‘I want it to be here’ or do you just open it up and see where the chips fall?

Liu: It was impossible for me or any other elected official to know where we really were because this is an administration that just for years has refused to divulge that kind of information. So in my first year as city controller I realized they were never going to give me the information for me to properly assess how we are actually doing with regard to opportunities for MWBE’s. So I set out to put my own report card together and that report card has been in operation for a little more than two years now. The report card simply looks at how much contracting dollars each agency actually spends with MWBE’s.Â  When we first launched it, it was in a dismal two percent. Now, I believe because this full transparency and people know exactly where the number’s going to be shown on my MWBE report carder website, the number has been inching up to a little more than three percent now — still far short of goals. Now, without the administration revealing its study that’s required by federal law, I don’t know exactly what the goal should be; whether it’s 20 percent, which is what the state goal is, or maybe even 25 percent because the city of New York has a higher concentration of minority and women entrepreneurs.

So that’s your strategy, sort of open things up, make it transparent and public pressure to a degree will cause the city to do things differently?

Liu: This is the lack of minority participation in city contracts is a plague.Â  Sunlight is always the best disinfectant.Â  To the extent that I have control over the contracts that the controller’s office lets out, both in our pension investments and bond underwriting we have tried to level the playing field much more aggressively such as the open competitions we’ve held for the bond sales and greatly expanding the portfolio of pension investments that are now designated for minority managers. We’ve increased that from $5.3 billion from when I took office to now $7.5 billion. But apart from what my office does in terms of engaging in contracts, for our office I don’t have any authority over who gets contracts through the other city agencies. All I can do is see what’s actually happening and disclose all that and make it easy for the public to understand what’s happening. And that’s what I have been doing and to some extent I think it’s working. Not as quickly as I would like it to work, but it’s working in terms of just, for lack of a better word, shaming commissioners into improving their records.

Is there resistance to what you are doing when you are sort of shedding the light on things and if there is, what is the reason for the resistance?

Liu: I think the overall problem of minority contracting in New York City or the lack thereof has to do with the administration, specifically the Bloomberg administration. This is an administration that values merit and talent and skill without looking at anything else. The problem I have with that attitude is that they are justifying looking very narrowly for a merit with the argument that they only look for merit. And in a city of 8.5 million people there is no excuse why the administration looks as non-heterogeneous as you could possibly get. And they actually pour salt on the wound by saying that, “Oh, we only look for merit.â€ If your administration is not diverse, than just admit to it but don’t go the extra step of pouring salt in the wound saying we only look for merit, as if to suggest that there’s no merit in all the diverse population that makes up New York City. The merit is out there. It’s just a question of how hard you are willing to look for that merit and how much of a different mindset you’re willing to accept.

What sort of things would you put in place to really encourage the growth of minority owned enterprises within this city?

Liu: There are many impediments that still exist in city contracting. For example, some of the bonding requirements where companies are supposed to post bond perhaps in excess of what’s really reasonable and necessary to some of the retainage practices where city agencies hold back 15 percent of the cost of a contract, even though all of the work has been delivered, just in case there are some problems a year or two down the road.Â  These are all making it more difficult for newer companies specifically minority entrepreneurs to actually get their foot in the door and compete fairly. So we have to change some of the procurement rules. It is also about getting commissioners to change their mindset with that push coming from the very top. It has to do with getting commissioner to see that when you really give people a different… lets say give a wide variety of people a chance to fairly compete for the contract ultimately that is in the best interest for the tax payers because they get a better bang for their buck.