John McAfee: FBI's Order to Apple is â€œMisuseâ€ of Law 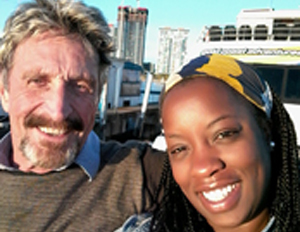 Cybersecurity guru and Libertarian party presidential candidate, John McAfee, spoke with Black Enterprise about his view on the FBI’s demand that Apple crack open the iPhones belonging to the deceased terrorists responsible for the December 2015 shooting in San Bernardino, California.

“The FBI is using an antiquated law in order to force Apple to put a backdoor in its software. This, I believe, is a misuse of the law–it was created in 1789, 200 years before the digital world even existed. I think the FBI really wants to get access to everyone’s phone. They can do that by having Apple write this software,â€ says McAfee.

The law to which McAfee refers, is the All Writs Act, a blanket provisionÂ allowing court orders to enforce judicial actions.

McAfee says this issue is more about the FBI not having internal talent capable of hacking the phone.

“A good hacker can decrypt that iPhone. I could do it. I don’t know why the FBI can’t unless the government doesn’t have the talent. The best hackers in the world have […] purple Mohawks and want to smoke weed while they are working. [That’s] not fine for the FBI. The bureaucracy has lost out on the finest cybersecurity talent,â€ he says.

The FBI and other law enforcement agencies and personnel make the argument that it is important to know what other data may reside on those phones in the interest of keeping the nation safe from terrorism.

“It’s important to recognize that the government is not asking Apple to redesign its product or ‘create a new backdoor to its products,’â€ said Josh Earnest, the White House press secretary at a recent briefing.

Earnest said the case was instead about federal investigators learning “as much as they can about this one case.”

McAfee isn’t buying any of that. “If they [the FBI] can’t decrypt it, they can go to a private security company.â€ He says the consequences for Apple complying with the government agency’s demand could be dire.

“The problem with putting in a backdoor into the software…the Chinese can find it, the Russians can see it…it makes us totally defenseless,â€ McAfee says.

“Tim Cook, he deserves all the praise in the world for doing this…we should all stand behind him,â€ says McAfee.

In addition to assisting with her husband’s presidential aspirations, she has proven to be a vital part of McAfee’s business ventures. Their company recently released a new product, Everykey, which John calls “a f***ing game changer” for security. With it, “[you] can lock down your phone, the house, all of your electronics with this little USB that you can wear on your wrist or on your key chain…if you lost your phone, you can remotely lock it,â€ says Janice.

Janice is also as adamant about the FBI/Apple issue, “I think it’s insane that they would even try to demand it. We have this encryption so that we can all stay safe. Just because we need to get into this one phone….so that every iPhone all over the planet is vulnerable? â€ she says.