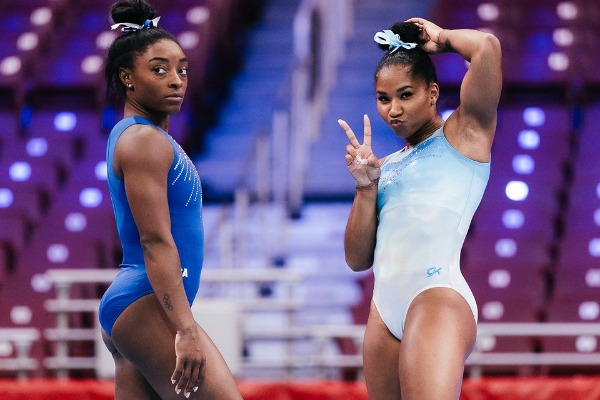 Seeing Jordan Chiles successfully earn her spot on the USA’s Olympic gymnastic team makes it hard to believe that she almost quit the sport in the years leading up to the Tokyo Olympics.

Chiles is among the six women set to compete for the gold medal at the 2021 Tokyo games kicking off in less than one month, Insider reports. Chiles, along with Simone Biles, Sunisa “Suni” Lee, Grace McCallum, Jade Carey, and MyKayla Skinner wowed judges at the USA Gymnastics Olympic Trials last weekend and are headed across the globe next month to represent the United States on the world’s biggest sports stage.

But it wasn’t smooth sailing for Chiles. She and Biles enjoyed a heartwarming sisterhood moments after she placed third in the 2021 U.S. Olympic Gymnastics trials Sunday night.

“When I watched the 2008 Olympics, I knew I wanted to be an Olympian,” Chiles
told NBC Sports. “But I didn’t really understand the concept of how to do that.”

Simone Biles hugging Jordan Chiles and saying "I'm so proud of you" gives me all the feels. #GymTrials21 (via @NBCOlympics) pic.twitter.com/R1EKhNDsCL

It turns out, just three years ago, Biles had to talk Chiles out of quitting the sport she knew her teammate had so much potential in.

“I didn’t think the sport wanted me anymore…So I went in the opposite direction,” Chiles revealed to The New York Times.

But it took a number of motivational talks with her family and Biles to give Chiles the push she needed to get back into the game. Biles even went so far as to invite Chiles to live with her in Texas and train with her and her coaches.

“I just wanted to finish high school and go off to college. But then I had a talk with Simone,” ChileS explained before also crediting her coaches for helping to reignite her love for the sport.

“Laurent and Cecile brought back the love of the sport for me – because it was gone,” she said. “They’ve given me so much encouragement. I didn’t get that too much in the past. I just thank them all the time.”

Simone Biles is often praised for how supportive and encouraging she is to her teammates. It only further solidifies her G.O.A.T status as an athlete and decorated Olympic gold medalist.