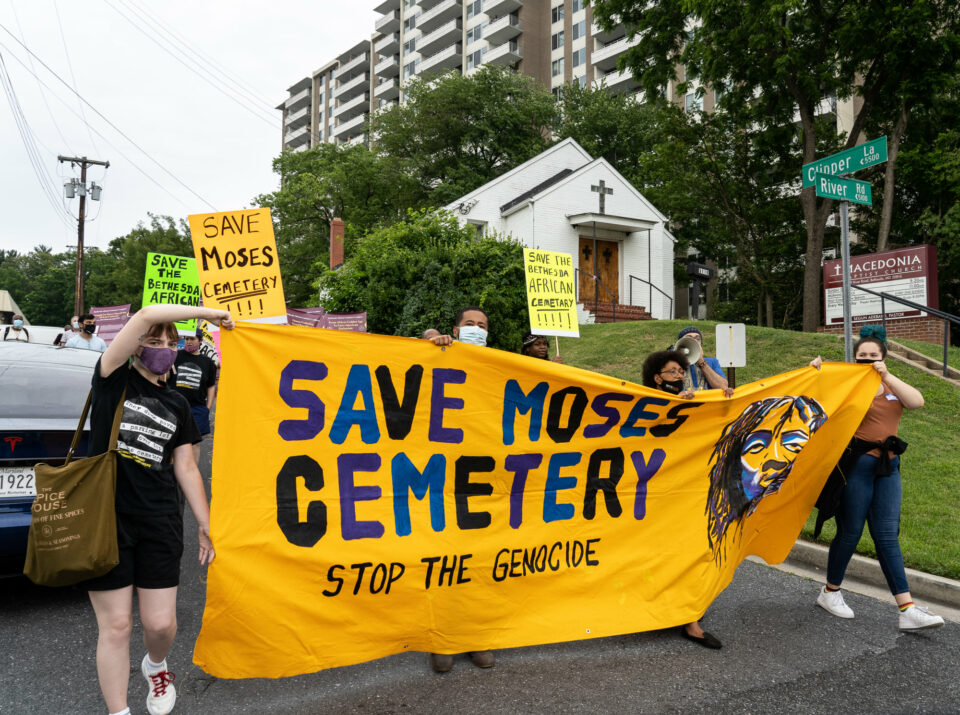 Mayland Residents protest the building of a parking lot over potentially hundreds of bodies of freed slaves and their descendants, buried in what was once a cemetery in the early 20th century. (Image: Twitter/@Ark Rezpublic)

A Maryland judge ruled a community group provided “overwhelming evidence” that a portion of a Maryland apartment complex served as a cemetery for freed Black slaves.

According to NBC News, the group furnished historical accounts indicating Moses Cemetery was paved over during the 1960s when the apartments were built. The coalition accused the MCHOC of violating state law by failing to seek and receive court approval for the sale, which is required when a cemetery property is involved.

Judge Karla Smith of the Montgomery County Court denied a motion by the MCHOC seeking to dismiss the suit and granted the coalition a preliminary injunction stopping the sale.

“Regardless of whether Charger decides to keep the parking lot, build on the lot, or dig up the lot, bodies of African Americans remain there,” Smith wrote, adding that “the Court has an obligation to ensure that such resting place is respected.”

Matthews, who has been fighting for the cemetery for years, testified that when he was a boy, the cemetery had more than 200 grave markers, many of which were during the construction of Westwood Tower.

In her decision, Smith said it was paramount to hear from the descendants of those buried at the cemetery and who previously lived in the community.

“The Court cannot ignore that Plaintiffs, African Americans, are seeking to preserve the memory of their relatives and those with whom they share a cultural affiliation,” Smith wrote according to Yahoo. “Nor can the Court ignore that as early as the 1930s when construction began in the River Road community, the deceased have been forgotten, forsaken and their final resting places destroyed or, at a minimum, desecrated.”

The MCHOC told NBC in a statement Tuesday it will continue to pursue a legal path that will allow the sale.