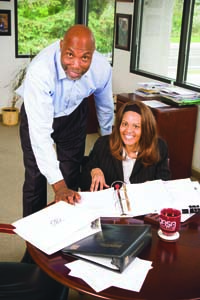 Before using project management software, Tony Williamson, co-founder and CEO of Ajasa Technologies Inc., used Microsoft Excel spreadsheets to track the project managers, database administrators, and software developers who, among other things, overhauled outdated IT systems for clients of his information technology staffing and consulting firm.

“That was just horrendous,â€ says Williamson, who owns Ajasa with his wife, Shelleye, both 50. “It was one huge spreadsheet. You’d open it up and somebody would have it locked; you’d save a copy and somebody else would come in and save another copy over yours.â€

Ajasa now relies on Microsoft Project Professional 2010 software. With the help of that tool, Ajasa’s revenues have grown to more than $35 million by providing IT services for national brands in financial services, retail, government, manufacturing, and other industries. Using MS Project, Ajasa’s 100 employees and 275 subcontractors (some of which are on the other side of the world) can access a master copy through a centralized server, and they can adjust the estimated time for their individual tasks without any overlap through a set of features called user-controlled scheduling.

MS Project allows project managers at the Golden Valley, Minnesota-based company to monitor multiple projects at a time and estimate the time frame within which each consultant should complete a task. Users have different access levels so the project manager can view budgets that consultants can’t see, says Williamson, who plans to expand operations to Augusta, Georgia. (There are already locations in Richmond, Virginia; Scottsdale, Arizona; and Omaha, Nebraska.)

Ajasa utilized the software to manage the build-out of a large-scale electronic money transfer system for a bank that converted its 12 regions into one centralized automated clearinghouse. They had to manage a 40-person team, including six members from Ajasa and others from the client’s staff, and complete the project–which lasted from 1997 to 2002–without disrupting any of the bank’s 81 million daily transactions. Now Ajasa has embarked on a redesign to make the transfer system Internet-based by 2015.

MS Project helped the team at Ajasa to see potential scheduling conflicts up front and balance the workload and costs with the system conversion.

Ajasa is counting on Microsoft Project to develop a workable timeline as the company prepares to launch a prototype for a secured mobile payment service called Paypongo, for which Williamson has a patent pending. The ambitious project will start this month, and the prototype is scheduled for completion by November 30.

Yet, project management software doesn’t guarantee a job will be finished on time, warns Williamson, who spends close to $6,000 for 10 licenses. “[MS] Project is not a miracle worker. It is only as good as the project manager and the data you input.â€