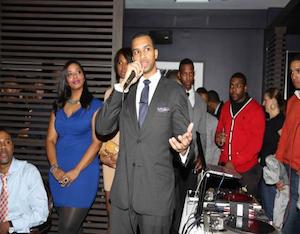 To commemorate this year’s World AIDS Day, we here at Black Enterprise are hoping to raise your receptors with a new sex health nonprofit known as Just Been Tested.

Founded by Alonzo M. Davis, a former Goldman Sachs vice president, Just Been Tested was created to provide free and confidential testing at colleges across the country. Geared towards those who are between the ages of 18-30, Davis and his Board of Directors hope to decimate the negative connotations and stigmas associated with sexually transmitted infections. In lieu of that, the social networking site also has goals to highlight prevention measures and promote awareness.

Just Been Tested allows users to engage in a Facebook-like manner and receive information about local testing sites, STIs, and share experiences in a community setting. One of the most interesting features on the website is that Test Date Verification, which allows members to verify their most recent STI test and post it to their profile. Within the African and African American communities, there is a lack of a true support system and limited access to inadequate services and treatment that greatly impact the collective.

“Just Been Tested has the potential to be very impactful within the [African and] African American community,” Mr. Davis told Black Enterprise exclusively. “Our testing strategy involves accessing people of color where they want to be. We target HBCUs and universities where the majority of students are on financial aid. At this critical juncture in their education, Just Been Tested wants to instill the value of taking responsibility for maintaining the practice of knowing the status of their sexual health. Developing the habit of getting tested regularly at this stage of young college students’ lives will help foster a habit of better decision-making processes regarding their general health.

Just Been Tested aims to make knowing and disclosing one’s status much easier. The free social networking service rewards users for not only knowing their STI status, but also for adding to the overall conversation about sex, relationship and sexual health. With the year coming to a close, Just Been Tested’s Indiegogo campaign will help the company screen 4,000 young adults, as well as conduct a 2015 Northeastern college tour.

For a better understanding at Just Been Tested and its goals, please watch this informational video below: