Just In Time For the Holidays: 'Black Card Revoked' 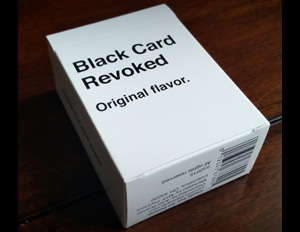 It’s happened to us all. You’ve been in a room of your peers, and divulge that you’ve never seen the movie Coming To America or played a game of Spades. The first thing a person says to you is, “Your black card is revoked!â€ Now you can actually test just how much ‘black knowledge’ you have in a new game of the same name: Black Card Revoked.

The game is a brainchild of marketing consultant and entrepreneur Latesha Williams and a group of her Brooklyn-based friends who created the game earlier this year. The game has become a massive success, and has already sold out for the holidays. We spoke with the game’s founder to find out about the inspiration behind the game, if she’s ever had her black card revoked, and what more we can expect from the brand.

BlackEnterprise.com: What inspired you to create ‘Black Card Revoked?‘
Williams: Black Twitter. We had been toying with game ideas for a while but the hashtags that popped up around Rachel Dolezal brought it to the forefront. That moment and moments like it (e.g., #cookoutnewsnetwork, #celebritiesonlyblackpeopleknow, #thanksgivingwithblackfamilies) brought a light to the shared experiences that every cultural group has. Black Card Revoked is the culmination of the Black Twitter illumination. What better way to completely disrupt ‘spades’ and ‘bid whist?’

Can you tell me a bit about your background?
I am a marketing consultant in addition to being the coÂ­-founder of Cards For All People. Before this I was the Head of Business Development and Digital for LeBron James, brokering deals with companies like State Farm, CocaÂ­-Cola, CarMax, Champs Sports, and Viacom. Jay, my partner and fellow co-Â­founder, is a software developer and longÂ­-time serial entrepreneur.

With the overwhelming success since its launch, are there any other product lines/releases planned down the line?
Absolutely! We just sold out of our first expansion pack for Girl’s Night Out and are set to release ‘Jollof Rice & Fufu,’ an expansion pack celebrating West African culture. Girl’s Night Out will be reÂ­-released February 2016, in time for Valentine’s Day. In January, we are introducing Femme Mogul, a program designed to empower women through entrepreneurship.

What is one thing about you where people have said your black card needed to be revoked?
I’ll never tell that (LOL), but Jay just told his sister, artist Keturah Ariel, that she needed her black card revoked because she didn’t know who James Weldon Johnson was.

What have been the challenges of starting your business?
Overall, we’d say managing growth, but more exactly scaling fulfillment and working with our manufacturers.

What do you hope to accomplish?
With Black Card Revoked, we hope to disrupt ‘spades’ and convert a sizable percentage of the African American population into consumers. We also have aims to bring the ‘Card Revoked’ series to other underserved populations as well.