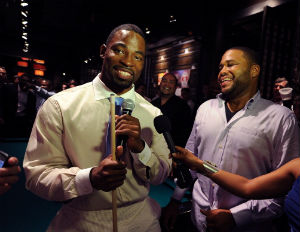 The warm New York City air could not compare with the warm feelings of those who shared their time and funds supporting New York Giants All Pro Defensive End Justin Tuck and the 5th Annual Tuck’s Celebrity Billiards Tournament Presented by RXR Realty.

Vivica A. Fox, Jason Kidd, John Starks, Melissa Joan Hart, and event emcee, Board Member Anthony Anderson were among other VIP’s who joined the soignÃ© crowd at Slate NYC lounge for Justin’s nonprofit Tuck’s R.U.S.H. (READ, UNDERSTAND, SUCCEED, AND HOPE) for Literacy. This unique event eschews traditional fundraising methods and presents a night of friendly, and sometimes fierce, competition that brings out some of the hottest celebrities year after year.

Toronto Raptors forward and fellow Octagon Agency athlete Rudy Gay stated, “I’m here not only to support a great cause but to also support my agency-mate, Justin.â€ Since the event was focused around literacy, we asked about his favorite book. Rudy lit up and gladly exclaimed, “My favorite book would have to be The Outsiders (S.E. Hinton). I remember reading it in like the 8th grade.â€

Several of Justin’s teammates including Eli Manning, Terrell Thomas, David Wilson and the recently drafted Justin Pugh also came out in allegiance to their fellow NY Giant, donning the red carpet and enjoying a night of fellowship, food, fun and philanthropy in support of a great cause.

In 2008, two-time Super bowl champion Justin Tuck and his wife Lauran wanted to fulfill their passion for youth development and create an organization that would address the harsh literacy rates affecting students throughout the country, starting in New York, New Jersey and Justin’s homeland, Central Alabama. Since establishing Tuck’s RUSH for Literacy, they have raised almost $2 million and have donated 55,000 new books to over 10,000 children. Additionally, they have granted over $200,000 to high-achieving youth serving nonprofits such as PowerPlay, NYC.

The passion and commitment that Lauran and Justin have shown to this organization is immeasurable. As much as he loves the accolades of his football career, Justin admits that the letters he receives from parents about children that were impacted by the organization bring him the most fulfillment.

“When I wake up in the morning, I think about how I can help these kids,â€ Justin stated.

Lauran Tuck, Justin’s wife, even enrolled in a Nonprofit Management Program for a year at the University of Pennsylvania in order to learn how to develop and grow the organization’s reach. Lauran attended the event as well, pregnant with her and Justin’s second child.

In addition to raising money for their own charity, Justin and Lauran also donated $25,000 of the event proceeds to Hurricane Sandy Relief efforts, which affected many of his faithful fans.

“This is a fun way for us to raise money for a great cause,â€ Justin effused. “$25,000 is kind of like a starting point. I want to continue to help those in the areas [affected by the hurricane] and the community that supported me all my career.â€