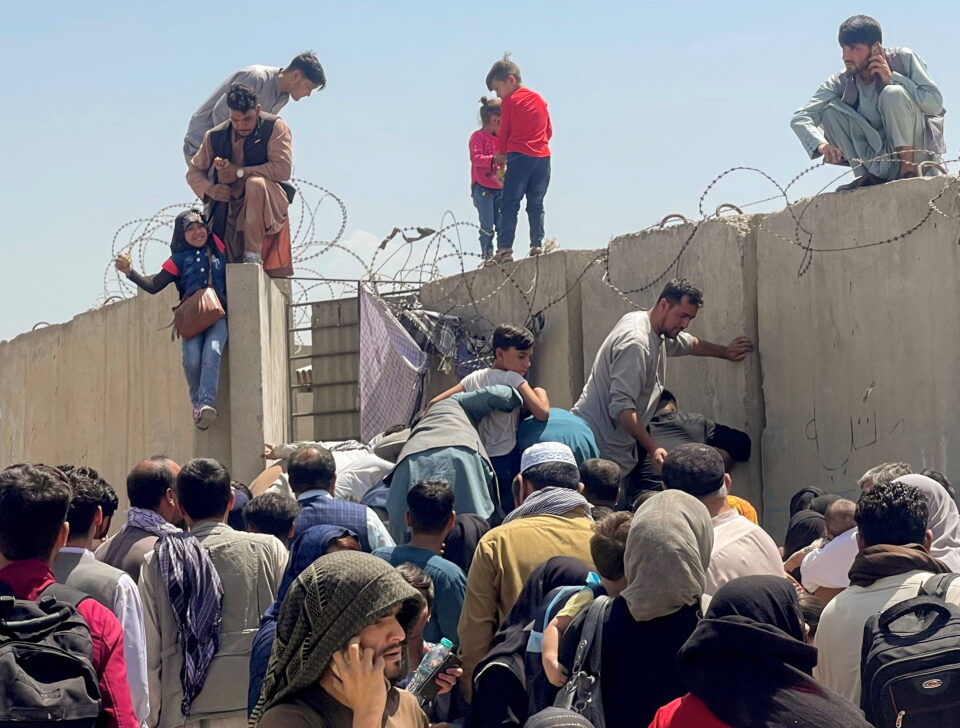 A man pulls a girl to get inside Hamid Karzai International Airport in Kabul, Afghanistan August 16, 2021. REUTERS/Stringer NO RESALES. NO ARCHIVES

Reuters – Thousands of civilians desperate to flee Afghanistan thronged Kabul airport on Monday after the Taliban seized the capital, prompting the U.S. military to suspend evacuations as the United States came under mounting criticism at home over its pullout.

Crowds converged on the airport seeking to escape, including some clinging to a U.S. military transport plane as it taxied on the runway, according to footage posted by a media company.

U.S. troops fired in the air to deter people trying to force their way on to a military flight evacuating U.S diplomats and embassy staff, a U.S. official said.

Five people were reported killed in chaos at the airport on Monday, although a witness said it was unclear if they had been shot or killed in a stampede. A U.S. official told Reuters two gunmen had been killed by U.S. forces there over the past 24 hours.

The speed at which Afghan cities fell in just days and fear of a Taliban crackdown on freedom of speech and women’s rights gained over 20 years have sparked criticism.

Biden, who said Afghan forces had to fight back against the Islamist Taliban, was due to speak on Afghanistan at 1945 GMT.

He is facing a barrage from opponents and allies, including Democratic lawmakers, former government officials and even his own diplomats over his handling of U.S. exit from Afghanistan.

The essence of frustration focuses on the administration’s lack of preparations – both in getting at-risk Afghans out even if they had months to plan and doing little to ensure some advances made on women’s rights do not evaporate overnight.

“If President Biden truly has no regrets about his decision to withdraw, then he is disconnected from reality when it comes to Afghanistan,” Republican Senator Lindsey Graham said on Twitter.

Republican Representative Jim Banks, a member of the House armed services committee, told Fox News: “We have never seen an American leader abdicate his responsibilities and leadership like Joe Biden has. He’s in hiding. The lights are on at the White House, but nobody’s home. Where is Joe Biden?”

Jim Messina, a White House deputy chief of staff under former President Barack Obama, defended Biden’s decision, saying there had been a bipartisan consensus that it was time to leave.

“We’ve been there 20 years. It’s America’s longest-running war, it is time to get out,” he said on Fox. “Why should American troops be fighting a civil war that Afghan troops this week refused to fight for themselves, it was time to get out.”

Ben Wallace, the defence secretary of the usually staunch U.S. ally Britain, said the 2020 Doha withdrawal accord struck with the Taliban by Biden’s predecessor, Donald Trump, was a “rotten deal”. Wallace said Biden’s decision to leave Afghanistan had enabled the Taliban to re-emerge in power.

‘NO ONE SHALL BE HARMED’

The United States and other foreign powers have rushed to fly out diplomatic and other staff but the United States temporarily halted all evacuation flights to clear people from the airfield, a U.S. defense official told Reuters.

Suhail Shaheen, a spokesperson for the Taliban, said in a message on Twitter that their fighters were under strict orders not to harm anyone.

“Life, property and honour of no one shall be harmed but must be protected by the mujahideen,” he said.

It took the Taliban just over a week to seize control of the whole country after a lightning sweep that ended in Kabul as government forces, trained for years and equipped by the United States and others at a cost of billions of dollars, melted away.

U.S. officers had long worried that corruption would undermine the resolve of badly paid, ill-fed and erratically supplied front-line soldiers.

Al Jazeera broadcast footage of what it said were Taliban commanders in the presidential palace with dozens of fighters.

Mohammad Naeem, spokesman for the Taliban’s political office, told Al Jazeera TV the form of Afghanistan’s new government would be made clear soon. He said the Taliban did not want to live in isolation and called for peaceful international relations.