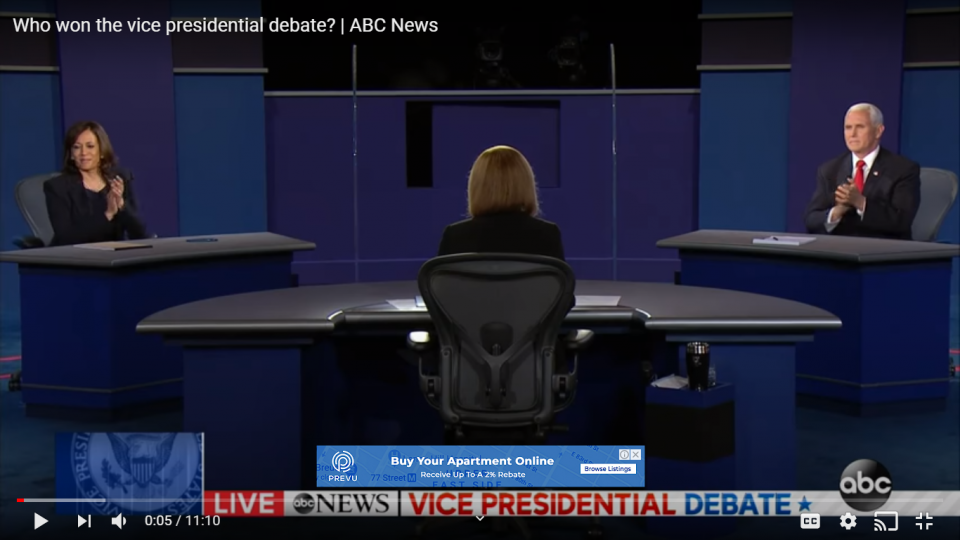 While the debate featured interruptions and both candidates avoided a number of questions, it was a much calmer debate than the one last week between President Donald Trump and Joe Biden. The debate also touched on more topics.

Here are a few takeaways from the vice presidential debate.

Harris Would Not Be Denied

While the debate was more relaxed than last week’s debate, that doesn’t mean it didn’t have its moments. Harris hit the ground running with a  bevy of facts on how the coronavirus has affected the country,

“The American people have witnessed what is the greatest failure of any presidential administration in the history of our country,” Harris said. “210,000 dead people in just the last few months, over 7 million people have contracted this disease, one in five businesses closed, and over 30 million people who in the last several months had to file for unemployment.”

The debate also featured multiple occasions where Pence tried to cut Harris off and she refused, telling Pence on several occasions that she was speaking.

Additionally, throughout the debate, Harris gave Pence some serious side-eye and other questionable looks as he tried to spin lies. One of these moments came when Pence talked about President Trump paying $750 in federal income tax.

However, unlike Trump, Pence is much more stoic, which meant the lies of the Trump Administration came from someone who had a softer tone and some respect for the rules–but little truth.

According to the New York Times fact checkers, Pence made nine misleading claims and six false claims, while just six were true or mostly true. When asked about certain topics during the debate, Pence went wide right.

When moderator Susan Page asked about Trump’s health, Pence attacked the Obama Administration over swine flu. Later, Page asked about the Supreme Court and Pence responded by discussing top Iranian general Qasem Soleimani, who was killed earlier this year in a drone strike. Instead of talking about protecting the health coverage of those with pre-existing conditions, he attacked Harris over court-packing.

Pence also told Harris on several occasions that Harris wasn’t entitled to her own facts, despite the Trump administration’s terrible relationship with facts.

Both Harris and Pence refused to answer direct questions and instead attacked their opponent at times. Harris sidestepped the question of Democrats potentially packing the court, something Pence was quick to pounce on.

Pence did his fair share of dodging as well as refusing to answer the question of a peaceful transfer of power and banning abortion.

Both candidates dodged Page’s question on what would happen if either presidential candidate wins and becomes incapacitated.

Pence completely dodged the question, asking to go back to the subject of the coronavirus and comparing it to swine flu.

“I think we need to move on,” Page said.

“I would like to go back,” Pence said. The vice president then discussed the development of a coronavirus vaccine, promising “tens of millions of doses” would be produced in “less than a year,” and portraying the swine flu as a massive public health crisis in 2009.

Harris dodged the question as well, instead of talking about how Biden invited her to be his vice president and how proud her mother would’ve been before listing her qualifications and experience and commenting on her fitness. Harris did not comment on conversations about succession.

That a fly resting on Pence’s head during the debate is one of the highlights from last night, points to how toned-down this debate was from Biden and Trump’s combative one last week. However, social media wasted no time creating memes for the little bugger that decided to take a break on Pence’s grey hair.

One Twitter user pointed out that within minutes of the fly appearing on Pence’s head, it became a social media legend. Other jokes concerning the fly ranged from the late Supreme Court Justice Ruth Bader Ginsburg to the fly conducting exclusive interviews to football. Actress Julia Louis-Dreyfus, the star of Veep, also had a nice quip for the moment.

Well, I wish we had thought of this on @VeepHBO – who’s controlling the fly? pic.twitter.com/x6NGEJs0Gy

To end the debate Page asked both candidates to take a minute and respond to an adolescent’s question of if our leaders can’t get along how can we expect ordinary citizens to?

Pence answered the question talking about how Supreme Court justices Antonin Scalia and Ginsburg were good friends despite being on opposite ends of many issues.

“Here in America we can disagree, we can debate vigorously as Senator Harris and I have on this stage tonight,” Pence said. “But when the debate is over we come together as Americans. That’s what people do in big cities and in small towns all across this country.”

Harris discussed leadership and pivoted to Biden and his vision for the country.

“One of the reasons Joe decided to run for president is after Charlottesville, it so troubled him as it did all of us, that there was that kind of hate and division,” Harris said. “Joe has a longstanding reputation of working across the aisle and working in a bipartisan way–and that’s what he’s gonna do as president.”