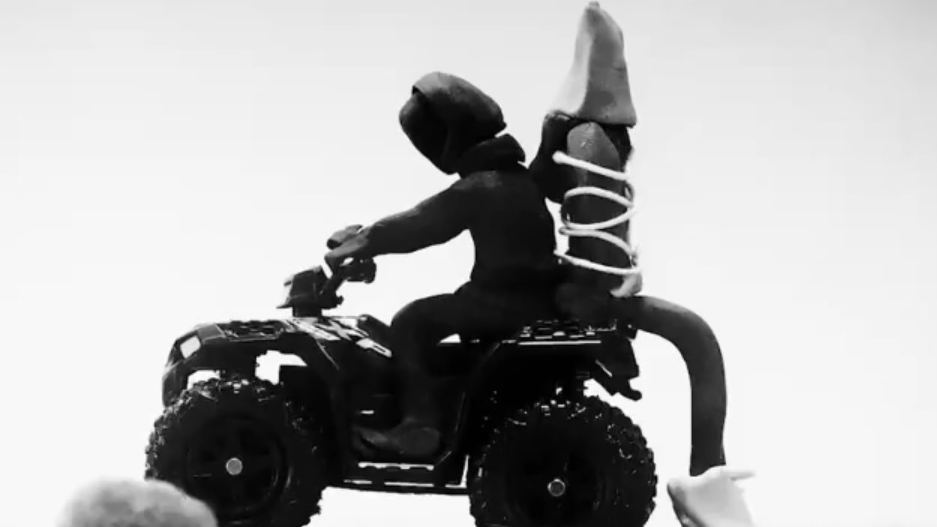 With the release of the video for the song Kanye West did with rapper The Game, Eazy, it’s apparent that Ye still has Saturday Night Live regular Pete Davidson on his brain.

In a recent Instagram post, Ye has continued the assault on his now ex-wife, Kim Kardashian‘s current love. The feud in Ye’s mind isn’t over as he appears, in Claymation-style, in the video for the Eazy song he recorded with Compton’s The Game.

The video begins with The Game reciting the lyrics for his verse. The visuals switch to the second verse with Ye and his words. Ye is seen riding on a motorcycle through what looks like a desert. The scene goes to a character who resembles Davidson, holding a drink in hand and a cigarette in the other. A bag is thrown over the head of the character as he is kidnapped.

While holding a severed head, Ye continues rapping the lyrics to his verse. He is then seen driving an ATV with the kidnapped victim tied up behind him on the seat. As he continues speaking about the divorce from Kardashian, he is shown dragging the body through a desert.

After the man is buried alive with his head still above the ground, Ye pulls out a pack of rose seeds and pours them around the head and neck of the buried man. He pours water on the head, and as his verse comes to an end, Ye is seen riding off to the sunset on his motorcycle.

He comes back to the site looking at the roses that grew on the head and prunes several roses. In reference to the truck of red roses he delivered to Kardashian on Valentine’s Day, he is seen driving a truck full of roses as the video ends.

Page Six reported that the SNL comedian returned to Instagram for a brief moment after Ye’s video was posted. But, he deactivated it once again.

Kardashian can legally drop the West off her last name as a court stated she is now legally single as she continues her divorce from West.

The reality TV star filed for divorce from Ye in February 2021 after being married for nearly seven years. The two share four kids: North, 8, Saint, 6, Chicago, 4, and Psalm, 2.