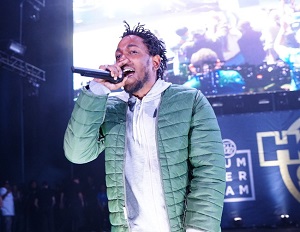 With two stages filled with live performances by today’s hip-hop elites, the entire nine-hour music event was live streamed worldwide to Tidal subscribers, allowing music lovers and fans at home to be a part of the annual event that’s considered one of hip-hop’s biggest concerts.

The day kicked off at Festival Stage with performances by Travi$ Scott, B.o.B, Dej Loaf, Charles Hamilton, Teyana Taylor and more. Later in the evening, Omarion set the tone high by kicking things off at the Summer Stage, followed by a performance by Ty Dolla $ign who brought Wiz Khalifa on stage as a special guest. Other Summer Stage performers included Trey Songz, Chris Brown, who brought out 50 Cent with G-Unit and French Montana. Fabolous kept the crowd screaming after Brown’s performance as he brought to the stage some of hip-hop’s biggest names including Lil Kim, Ma$e, Method Man, Red Man, Fat Joe, Remy Ma, Busta Rhymes, Raekwon and more.

Kendrick Lamar had the crowd rapping along as he performed hits off his debut album Good Kid M.A.A.D City and his latest work of art To Pimp a Butterfly. Afterward, Big Sean hit the stage to perform some of his solo hits and then came back on stage to join Meek Mill who brought out Future and his girlfriend Nicki Minaj. New Jersey native Fetty Wap closed out the show on his birthday before thousands of fans left the stadium after another successful Summer Jam.

“Each year I’m blown away by the incredible talent that hits the stage, as well as the immense response we get from our audience,” said Deon Livingston, who is the General Manager of Emmis NY, which owns Hot 97. “This year, due to strong demand for tickets, the show sold out in the early evening. When fans realized tickets were no longer available at the box office, a small number of individuals created an unsafe environment. The New Jersey State Police took steps to ensure the safety of concertgoers and our employees, which is always our top priority.”

Check out a few photos from the festival by clicking below.