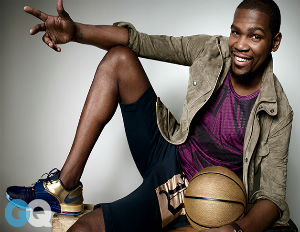 Kevin Durant follows LeBron James’s fashion lead. During the 2015 All-Star Weekend, James’Â production company, Springhill Productions, produced the first-ever NBA fashion show: All-Star All-Style. Now, in the March 2015 issue of GQ, Durant, a forward for the NBA’s Oklahoma Thunder profiles in Gucci and Burberry showing that he is not just any forward; he is fashion forward.

In his bio from the NBA, it says that Durant “loves to play video games (NBA Live and March Madness) and shopping for clothes.” According to Forbes.com, Durant has a $14 million deal with Nike. But I think his agent at Roc Nation Sports may want to check out some couture endorsements.