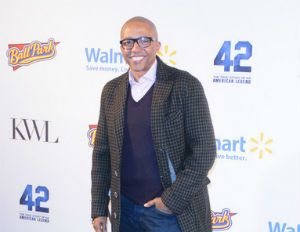 Music industry executive Kevin Liles is just one of the few celebrities who has shown their support for the upcoming release of “42.â€

In anticipation of the release of the critically acclaimed Jackie Robinson biopic, Kevin Liles hosted an exclusive VIP screening at the Brooklyn Academy of Music two weeks ago for industry executives, press and celebrities. The film expertly sheds light on the life and legacy of baseball legend Jackie Robinson. As many may recall, Robinson’s legacy can be recounted to breaking baseball’s color line.Â As the first African American Major League Baseball player, Robinson wasÂ singled out by his talents and celebrated for his triumphs.

This Friday, April 12, the movieÂ 42, will be released nationwide. Additionally this year and every year on April 15, Major League Baseball celebrates Jackie Robinson Day.