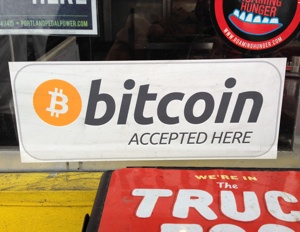 You can buy satellite television, a reclining loveseat, and an education, all with bitcoins. (Image credit: Francis Storr)

Paying for college just got a little easier, at least if you have a few bitcoins in your wallet.

Last Friday, King’s College announced it would be accepting bitcoins as payment for tuition. The New York college will team up with Coin.co, a merchant transaction processing company based in New York. The company handles transactions in bitcoins, which are then converted into U.S. dollars for merchants.

On King’s College’s blog, the college says it’s the first accredited college to accept the virtual currency. “Much like the first universities or businesses to obtain email addresses, The King’s College is standing at the forefront of change,” the post says.

According to TIME, paying King’s College in bitcoins will eliminate the transaction fee of 2-3% when paying with a credit card. Coin.co has no transaction fee.

“Over the past year, the Coin.co team has led the effort to enable U.S. colleges, universities and other major institutions to accept Bitcoin without incurring any currency risk,” said Coin.co CEO Brendan Diaz. “Coin.co is proud to be working with The King’s College, and to be a part of pioneering the use of Bitcoin for education.”

King’s College is the first college in a growing list of institutions accepting bitcoin as a viable form of payment. Most recently, companies like Dish Network, Overstock, and Expedia have started to accept the virtual currency for purchases.