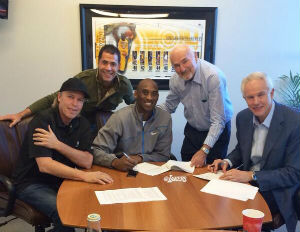 Kobe Bryant, who was expected to become a free agent at the close of the 2013-14 season, signed a two-year extension with the Lakers. The terms were not disclosed, but a source has told ESPNLosAngeles.com’s Ramona Shelburne that the deal is worth $48.5 million.

Bryant is still recovering from a torn right Achilles tendon, which he suffered on the eve of last year’s playoffs. Bryant, 35, was recently medically cleared to play and is expected to make his debut at some point within the next couple of weeks.

“This is a very happy day for Lakers fans and for the Lakers organization,â€ said Lakers General Manager Mitch Kupchak. “We’ve said all along that our priority and hope was to have Kobe finish his career as a Laker, and this should ensure that that happens. To play 20 years in the NBA, and to do so with the same team, is unprecedented, and quite an accomplishment. Most importantly however, it assures us that one of the best players in the world will remain a Laker, bringing us excellent play and excitement for years to come.â€ 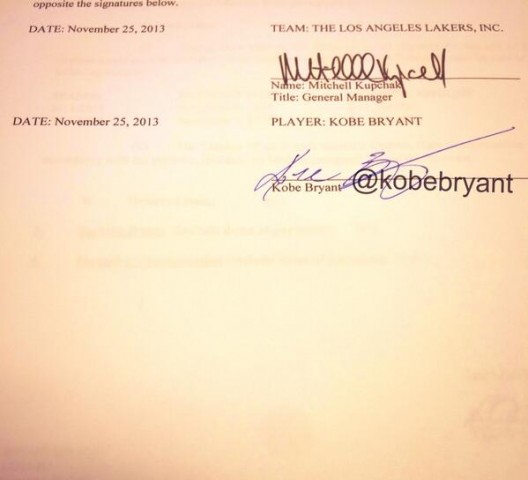 Kobe later tweeted the above picture with the hashtag #Laker4Life.