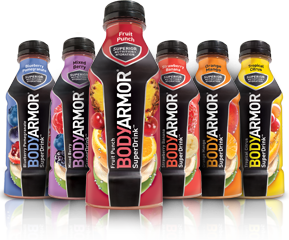 Over the past year, Los Angeles Lakers guard Kobe Bryant has been studying how to be a businessman. He has met with executives at Twitter and Instagram and stopped in on college business classes during road trips. Now under Kobe Inc., the NBA superstar has made his first equity investment in the upstart sports drink BodyArmor.

Bryant will sit on the board of directors and own more than 10% of the company, according to Forbes and an inside source familiar with the negotiations. His investment makes him the brand’s third largest shareholder behind BodyArmor co-founders Lance Collins and Mike Repole (who co-founded Vitaminwater and Smartwater, which was sold to Coca-Cola for $4.1 billion in 2007). Bryant would only say that he invested millions of his own money, but it is reported that it is expected to be in the $6 million range.

Launched in 2011, BodyArmor has generated $10 million in revenue over the past 12 months with sales more than doubling each of the past two years. Each of the brand’s six flavors contains coconut water, two and a half times the electrolytes of traditional sports drinks and are low in sodium.

Bryant, in an exclusive interview with ESPN, talked about forming his own company, called Kobe Inc., and building a team around him to start new businesses and evaluate investing in others. Even though this past November, Bryant signed a two-year, $48.5 million extension with the Lakers, he is keenly focused on life after pro-ball as an entrepreneur.

RELATED: The Incredible Life and Trying Times of Kobe Bryant

“I have always had ideas and always had a vision of where I wanted to go going back to 2000, but they are just ideas,” Bryant said. “Now, once the Achilles injury took place [last year], I’m sitting at home for months not moving, a couple of things set in. One is that there are only so many Modern Family episodes a person can watch. And then two, what do I do now?”

Bryant said he then put pen to paper and began executing his vision, which included a mission statement. “We want to own and help grow brands and ideas that challenge and redefine the sports industry while inspiring,” Bryant said. “If it doesn’t have the limbs of the sports industry, which I understand extremely well, then I probably won’t touch it.”

Bryant told ESPN he has watched previous NBA greats like Michael Jordan and Earvin Magic Johnson turn basketball careers into lucrative business relationships. Jordan has famously made money by licensing his name to Nike to make Air Jordan sneakers. Magic has made much of his money by allowing others to use his name as well. But the path Bryant seeks will be more hands-on.

“I want to be a part of something and if you want to be a true entrepreneur you have to put skin in the game,” Bryant said. “At this stage in my life, I don’t have the interest in taking on any more endorsements.” During his professional career, Bryant has netted $280 million in playing salary and $300 million from endorsements, which include Nike, Turkish Air, Smart Car, Hublot and Panini.

Bryant added that there is a common denominator among entrepreneurs: “they all have the ability to understand people, to communicate properly, to have vision, to have guts and to have this kind of patient persistence in the process.”