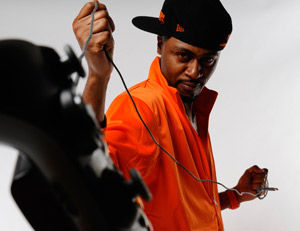 The best job anyone can ever have is one they’re passionate about. Tired of walking down a career path that wasn’t inspiring, Clemille “CJâ€ Peters, Jr. created his own lane. Eight years ago the 34-year-old founded Konsole Kingz, LLC. Originally a DVD-based magazine, it has since evolved into a multimedia technology company that uses hip-hop culture to market and promote video game brands. Peters, along with partner Marcus Matthews, 40, were able to generate close to half a million in revenue in 2010, through celebrity tournaments, song placement deals, ad revenue and developing games for iPhone, including Kandi Burruss‘ Kandi Koated Spades app. BlackEnterprise.com caught up with the tech savvy duo to see how they earned their crown in the video game industry.

What type of business is Konsole Kingz?

Matthews: Konsole Kingz is a brand that connects followers of the hip-hop lifestyle with the video game industry. We have a consumer arm that has a community of gamers who are into hip-hop. We provide relevant content, such as video reviews and virtual goods. Additionally, our business arm provides PR, business development, and event services to video game companies, which includes celebrity tournaments, character likeness rights, and soundtrack placement.

What was the inspiration behind starting Konsole Kingz?

Peters: I was inspired to start Konsole Kingz because I wanted to make my mark on the world by utilizing my passion and God-given talents. Not to mention, that with all the help I’d given others throughout the years, I noticed it was time to help myself. I believe the best way to make your mark on the world is to do things rooted in your passions. My passions are hip-hop music, video games, design, technology and beautiful women. I was looking for a way to put all these things into one vehicle, hoping the world would accept them. My first attempt, a hip-hop DVD magazine, proved unsuccessful. However, from it I extracted Konsole Kingz, which actually turned out to be a better-suited vehicle to showcase my passions and talents.

What were some of your biggest hurdles getting the company out of the red and in position to be a profitable brand?

Peters: In the beginnings, the company’s success was planned to be from our flagship product, The Konsole Kingz DVD magazine. Having limited access to capital to properly market a national niche product proved to be a very dooming challenge. We overcame it by deciding to go all-digital via the Xbox 360 and not the Internet. At the core, our product is for consumers who play video games. When Microsoft announced their updated XboxLIVE service would be able to play streaming video, we knew we had to drop the DVD format.