Krispy Kreme To Open Its First Shop in India 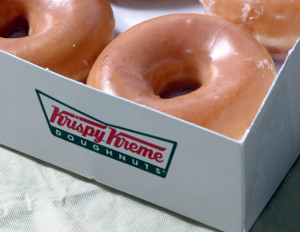 Fast growing doughnut franchise Krispy Kreme is opening its first location in India. Its doughnuts, which can be found at gas stations, 7-Eleven’s and other fast food stores is known for its delicious heavy glazing, and are usually made fresh in front of customers.

Since 2004, the brand has rapidly expanded its international operations. The company reported 362 million in sales for 2011.

Today, Krispy Kreme announced a new partnership with Citymax Hotels Pvt. Ltd., for the development of 80 franchise Krispy Kreme retail locations over 5 years in the South and West regions of India. Citymax Hotels is part of the Landmark Group, one of the largest retailers in India and the Middle East.