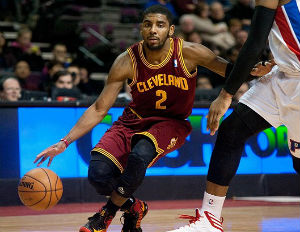 Uncle Drew may be old, but he’s not old enough for video games.

To his ever-popular Pepsi endorsement in which he hilariously plays an old man with a whole lot of game — “That’s a pocket pass!” — Cleveland Cavaliers all-star guard Kyrie Irving has added a relationship with EA Sports: He’ll be featured on the cover of NBA Live ’14, it was announced Monday at E3 in Los Angeles Convention Center. Irving was in attendance.

“By utilizing the same data used by all 30 NBA teams, more than 70 unique statistics and tendencies will fuel every single player on the court,” EA Sports said in a statement. “From the way they move, to the way they play, to the decisions they make, NBA LIVE players will evolve throughout the season with updates from every NBA game within one hour of a game’s final buzzer. Gamers will now have a new experience every time they pick-up the controller.”

Irving’s star has soared since he entered the league, fast establishing himself as one of its most talented and marketable stars since arriving from Duke two seasons ago. In addition to his deals with Pepsi Max and EA Sports, Irving has endorsement deals with Skullcandy, Foot Locker and Nike.

Cleveland has the first pick in this month’s NBA Draft to add to Irving and its talented core of young players. Many expect the Cavs to select Nerlens Noel out of Kentucky.