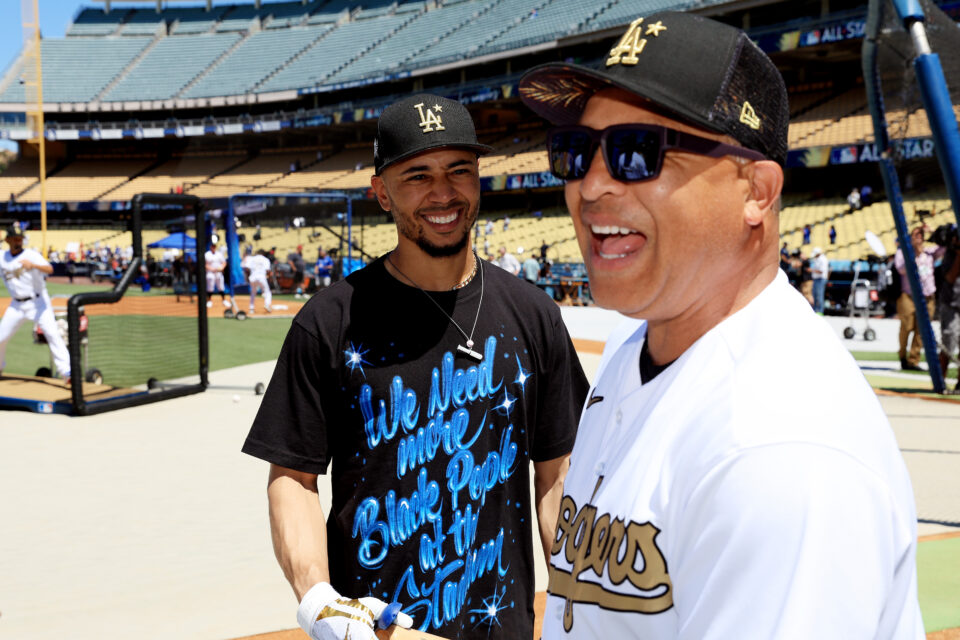 “We need more Black people at the stadium,” the message read.

I saw Mookie Betts come out without his jersey. I asked if I could take a photo of his shirt.

“We need more Black people at the stadium.” pic.twitter.com/QSCcYDgSTy

Before the game, Betts took the mic at his hometown Dodger Stadium as both the National and American League All-Stars gathered around him for a birthday greeting to Rachel Robinson, the wife of the late Jackie Robinson, who would have turned 100 on Tuesday.

“I’m just glad everybody joined in,” Betts told reporters after the game. “Everything she’s been through and is going through, it may be rough on her, but she’s handling it very well.”

Betts’ career has put him on the fast track to being inducted into the Baseball Hall Of Fame. The six-time All-Star is a former MVP and a two-time World Series champion and is also one of baseball’s prominent Black faces.

The former Red Sox outfielder said he spoke with MLB about the pregame birthday celebration for Robinson the day before the game, saying he was the ideal candidate for the ceremony; a Black player, on the same team Robinson played for, minutes away from where the legend was born, in Pasadena.

Betts had just one at-bat in the All-Star game, hitting an RBI single in the first inning. He was pulled from the game in the third inning. Betts told reporters that he’s learned to embrace the responsibility of being a Black ambassador of the sport, after admitting to shying away from the burden in the past.

“I used to kind of shy away from it,” says Mookie Betts when he’s asked about the statement shirt he wore at the #AllStarGame. But he credits his growth for using his voice to make a difference.

“It’s what I signed up for.” pic.twitter.com/Fngnr0Kvjy

The MLB has made several efforts to attract more Black Americans to the sport, including its Reviving Baseball In Inner Cities (RBI) program and partnering with HBCU schools. However, the sport has yet to see results at the Major League level. According to the Los Angeles Times, 7.2% of players on Major League rosters are Black Americans, a drop from 7.6% last season.

However, at the lower levels, there are signs of change. During this year’s MLB Draft, four of the top five players selected in the draft were Black, including Drew Jones, the son of former Atlanta Braves outfielder Andruw Jones and pitcher Kumar Rocker, who helped Vanderbilt University make it to the final round of the NCAA College World Series in 2021.

Major League Baseball noted it was the first time four Black players were taken in the top five picks since the draft was introduced in 1965. Five Black players – Betts and four American League players – started in Tuesday’s All-Star Game.

Former MLB outfielder Deion Sanders, who played for the Braves and the Yankees, and who is now the head coach of Jackson State University’s football team, had an interesting take on why the number of Black players has declined in the MLB.