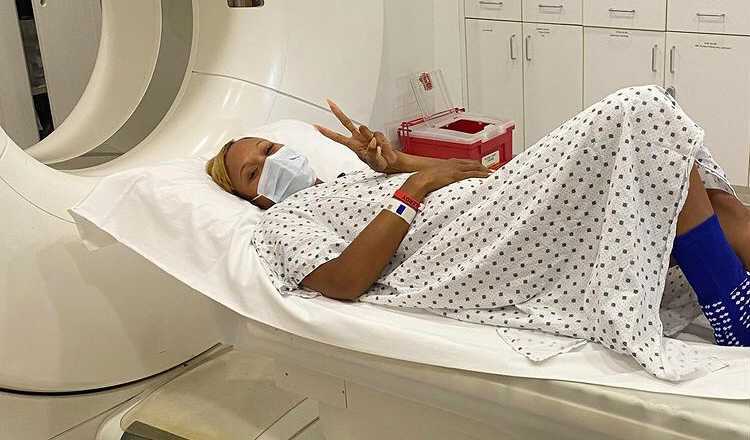 In a post on Sept. 12, Parr posted a pic laying down on a CT scan machine, followed by two photos of a bulge at the center of her abdomen.

“I have been quietly battling something for quite some time, and I’m finally ready to share it,” she wrote. “I found out this year that I have been walking around with a malignant tumor inside my ovary that has grown 5 inches wide in size.”

Parr told her 286,000+ followers that she delayed sharing what she’d been going through because she had a lot to process. She delayed treatment because she wanted to ensure her personal and professional affairs were in order, including her children, niece, and AAU team.

On Tuesday, she posted a video of herself rolling on a hospital bed following her surgery.

“Surgery update: Everything was successful, my tumor is removed and I am now recovering!! They are having some issues getting my pain under control so they’ll be keeping me until that’s handled,” she wrote. “Other than that all is well!!!! Thank you for all the prayers and well wishes! I’ll check back in once I’m home and in my own bed!”

Just two weeks ago, the White House declared September Ovarian Cancer Awareness Month. President Biden said in the White House briefing that his “Administration is also dedicated to protecting ovarian cancer patients through the Affordable Care Act (ACA),” and that “despite ovarian cancer rates being highest among white women, Black women are more likely to die from this disease because of lack of access to healthcare, socioeconomic disparities, and other causes still under study,” according to reports.

While ovarian cancer ranks No. 5 in leading causes of death among women, Black women are most affected.

“Between 1975 and 2016, the five-year relative survival rate for ovarian cancer increased from 33% to 48% among non-Hispanic white women but decreased from 44% to 41% in African American women,” according to cancer.gov.