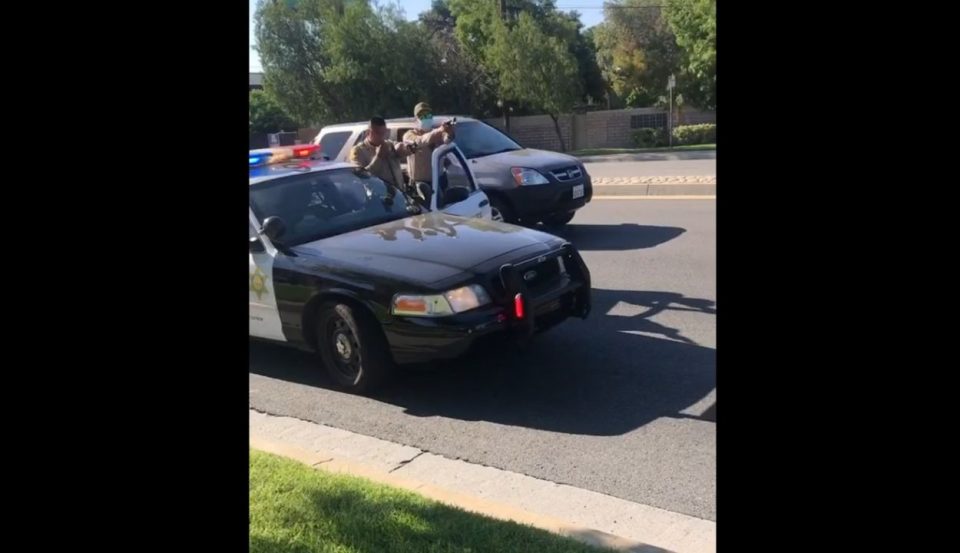 A video surfaced online of police officers in California drawing their weapons on unarmed Black teenagers who didn’t commit a crime, according to TheGrio.

Tammi Collins, the mother of one of the boys detained, said her son and his friends were being attacked by a homeless man last Friday at a bus stop while on their way home. The homeless man had pulled out a knife and attempted to use it on them. A restaurant worker called the police and instead of searching for the man, the police officers pointed their weapons at the teenagers.

This video was taken at the scene of the incident.

I wanted to share what happened to my son yesterday in SCV when he was with a couple of friends sitting at a bus stop headed home. He was attacked by a gentleman (homeless guy) who approached them and first asked them if they had any crack then tried to take their things. The guy became so aggressive that he took his shirt off pulled out a knife and whip them tried to stabbed them. His friends only had their skate boards to cover them from the knife and whip so they held it out to keep distance from this guy. Several bystanders including the restaurant manager of Buffalo Wild wings called the police to get help for the boys but “One” caller called the police and reported two black guys are attacking a homeless guy. This is how the police responded. This is something my son and his friends will never forget. I’m still wonder how will I ever help my son recover from this traumatic experience. Please pray for my family. Please Share to protect our kids!!!

According to The Defender Network, Santa Clarita Mayor Cameron Smyth released a statement on Monday, which reads in part:

My statement regarding the recent video involving a call for service in Santa Clarita. The matter is being investigated & we will provide updates as they become available. pic.twitter.com/yu1ZCXtVKz