LaVar Ball And The Role Of The Black Sports Father 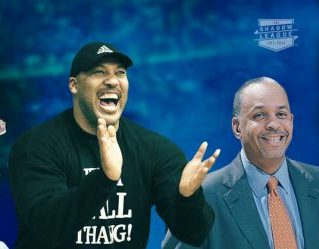 (Image: Courtesy of The Shadow League)

“Back in my heyday, I would kill Michael Jordan one-on-one,” said LaVar Ball.

And so the saga continues.

LaVar is a proud Black man and an even prouder father who takes no shorts when it comes to his sons and their success. In the mold of Richard Williams, father of Venus and Serena Williams, LaVar has not only taken control of his children’s futures but has also assumed the role as their spokesman, which includes shifting the spotlight to himself through outlandish and random statements.

He has gotten into it with Charles Barkley, claimed that his sons are worthy of a $1 billion marketing deal with a sneaker company, stated that LeBron James’ sons “will be wack at basketball” and said that Lonzo was better than Steph Curry. Not Davidson Steph Curry, but Golden State Warriors Steph Curry.

While I don’t agree with the things that Ball has stated or his need to be in the media spotlight, I will defend and support him for being a father of color who doesn’t play when it comes to his children. His statements might be outrageous, headline inspiring and media captivating, but I believe we need to place his made-for-TV quotes aside and look at what he is actually doing.

He’s parenting, and parenting children of color in a country lead by an administration fearful of color.

In times where people of color are being profiled, stereotyped, harassed, brutalized and murdered, Ball is exerting control over the direction of his children instead of letting others dictate it. As a Father of two young boys of color, I appreciate, applaud and support that.

Too often we’ve heard the stories of child prodigies whose lives headed down the wrong direction or who were taken advantage of. With their Father in the picture, Lonzo, LiAngelo and LaMelo have a strong barrier of defense which won’t be intimidated or crumble in the face of criticism, scrutiny or pressure.

LaVar Ball represents a factor not emphasized enough, the Black Father. Many times we hear the stories of athletes being raised by single mothers who are revered and celebrated for their hard work in getting their children to where they are. We saw Allen Iverson’s Mom proudly hold up her sign in support of her son. We watched Kevin Durant give his League MVP acceptance speech in which he emotionally thanked his Mother for all that she did for him. These are two of the many examples of real parental success.

Black Fathers have faced a different struggle when it comes to raising children who eventually become pro athletes. They have been namedÂ as a factorÂ attributed to the declining rates of Black players in Major League baseball. Some are absent, some have passed away and some are seen but not heard.

Absent fathers have plagued communities of color for a long time, affecting boys and men who sometimes don’t know how to express their emotions surrounding these men who chose not to be a part of their lives. The anger which swirls inside can cause emotional outbursts, self-blame, lack of confidence or pure hatred.

But don’t be fooled into thinking that fathers of color aren’t involved in the lives of their professional athlete children because you don’t see or hear them. That’s far from the truth.

Head to the Bay Area to see the relationship between Del, Steph and Seth Curry. Not only is Del at the games cheering his son on, he was present in the years leading up to their collegiate and pro basketball success, spending countless hours teaching them the game and about life, both on and off the court.

Ask Shaquille O’Neal about his “biological”, Joe Toney, and his father, Phil Harrison. Look at the famous image of Michael Jordan on the locker room floor, emotional after winning his fourth NBA Championship, his first since his father was murdered three years prior.

Black fathers teach their sons how to be men. The issue of the absent Black father has had a severe impact upon our community, an issue which affected President Barack Obama to the point where he founded his My Brother’s Keeper initiative in 2014.

I believe the continuing struggles of so many boys and young men–the fact that too many of them are falling by the wayside, dropping out, unemployed, involved in negative behavior, going to jail, being profiled–this is a moral issue for our country… – President Obama

But it’s really the connection that fathers build with their sons that ultimately has an effect on their lives, not whether they’re in their everyday lives. Mark Ingram Sr. and Jr. are manifestations of this notion, where the former was a part of his everyday life and upbringing, eventually separated when Sr. was incarcerated for money laundering charges right when Jr. was a few short months away from being drafted into the NFL. But that didn’t stop their communication, discussions or lessons about life. They continued, even while Sr. was in jail

“He coached me in everything. He helped out in football practice and in track. Every step of the way throughout every phase of my life he has been there and been a positive influence on me. That’s my dad, but he is also my best friend.”

So although he made mistakes in his life choices, Ingram Sr. did right by his son, so there’s truth in the notion of the importance of connection.

“It’s not the absence of the father but whether or not there is quality involvement. Many black men who are not with their children are involved with their children’s lives,â€ says Virginia Commonwealth University professorÂ Faye Belgrave, who is writing a book on African-American boys. “Family structure doesn’t matter as much as long as a boy has quality time and positive involvement with his father.â€

In today’s society, many confuse confidence with arrogance, especially when it comes to men of color. Ball is, somewhat, a victim of this trend and has quickly become a catch-22 for Black sports fathers, where he’s criticized for being brash, arrogant and detrimental to his family, but not commended for how he’s not letting anyone or anything come between him, his sons and their success.

While this is partly his fault, there’s absolutely no way that he’s apologizing for it; he’s comfortable with a target being placed on his back, as opposed to it being on his sons. I think he could be considered the current day version of the aforementioned Richard Williams, who might be considered one of the greatest Black sports fathers, and even coaching father period (according to Forbes), in history.

Williams coached Venus and Serena to become two of the greatest tennis players, athletes and role models we have seen in our lifetime. But to get them to that point, Williams had to fight in almost every aspect of his life in his quest to navigate them toward greatness.

Williams, like Ball, was, and remains, unabashed and unapologetic in his parenting, opinions and attitude when it comes to his daughters and their treatment by others. Coming from the tough, gang infested area of Compton, he sometimes had to literally fight to get his girls time on the tennis courts.

Williams was the Black father that the white sport of tennis feared – he was smart, understood what he had and would take no shorts in protecting and defending his children.

Said Williams, “I really just think a lot of people in the tennis and business world are jealous of me. They’d rather see me sweeping the floor at the U.S. Open or picking cotton somewhere. But I’m not.”

That train of thought is nothing new, nor is the racism that Williams draws his thoughts from, for it is scary and intimidating for the white dominated sport of tennis to see a Black man bring his daughters on to the grass at Wimbledon and dominate while donning beads in their hair.

Ball has followed the same path carved by Williams. Also hailing from a rough part of California, South Central, Ball is the epitome of the large Black man that makes people think twice before engaging. Through the stories on him, and his interviews with the media, Ball has proven to be direct, blunt, entertaining but dead serious. He, like Williams, doesn’t pull punches or compromise his beliefs, regardless of the critics.

Ball has refused to let anyone take advantage of his sons, including UCLA and the NCAA. As a former athlete and successful entrepreneur, he knows the game and how it can quickly swallow up and discard athletes, particularly those of color, so he’s not about to let his sons go through that experience. He’s a mixture of old school values with new school awareness, understanding how to use the media to his advantage instead of the other way around. Need proof? The hashtag #LaVarBallSays blew up on Twitter Tuesday and was one of the top trending hashtags of the day. LaVar Ball and Richard Williams might be ridiculed for the things they do and say on camera, with many stating that they are actually harming their children instead of helping them, but the results speak volumes. Things have turned out pretty good for the Williams sisters, and as for Ball’s response to this claim, he simply reaches back to some old school values and and recites a conversation he had with Lonzo: “I told him, ‘Son, hurting you is not talking about you. Hurting you is cracking you upside the head.'”

Ball’s emoting might be criticized and act as perfect fodder for media, but his loyalty, dedication and vigorous support for, and protection of, his sons cannot be underestimated, nor should it be slighted, ignored or dismissed. If you don’t want to hear his thoughts or outrageous claims, don’t ask and don’t watch.

Is he living vicariously through his sons? I’m sure that holds a little truth, but don’t we all? When we share the same passions as our children, don’t we see a little of ourselves in their triumphs? Don’t we take pride in their success to the point where we attribute a little of the success to our efforts? We don’t all brag about it or go on camera about it, but seeing your children become successful, even more successful than you, is one of the goals parents strive for.

Plus, shouldn’t we be giving more attention to the fathers of color that are active in, and supportive of, the lives of their children? Even if the methods employed aren’t approved by the masses, if the children are benefiting, should it not be respected?

According to Dr. Shauna M. Cooper, this needs to be the approach taken in today’s society.

So maybe LaVar handles the limelight differently than most of us. If you can cut through the verbal distractions and see Ball for what he is, a proud Black man who is even prouder of his sons, then you can appreciate him as a father who won’t let anyone take advantage of his sons, as opposed to a distraction or harmful parent.

And if he’s the next great Black sports father like Richard Williams, that’s a good thing, is it not?