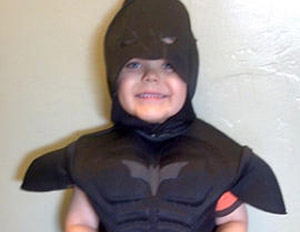 I’ll admit, when I saw the hashtag for this, I barely paid it any mind, wondering why in the world #SFBatkid would be a popular topic on Twitter. After I began to notice people I follow tweeting about it, the nosy journalist in me decided I’d take a look to see what the fuss was about.

Boy, was I blown away.

Because of many amazing people in the San Francisco Bay Area, Miles, a boy fighting leukemia, took over the city for a few hours to realize his dream of being a superhero. The Make-A-Wish Foundation along with volunteers, prompted by a viral email turned the area into Gotham City, with popular characters and themes played out like a comic book. (Their Website has even temporarily shut down due to the hoopla.) In usual social media manner, the news went more than viral on Twitter, garnering international attention and support. (Even President Obama has joined in congratulating Miles on his Friday evening feats.)

The first thought that came to me was the amazing fact that when people actually unify for a cause… well, awesome things happen. Since I’m always focused on career-related themes, here are three life-changing leadership lessons we all can gather from the Friday phenom known as Batkid:

1. There’s no time for excuses. This 5-year-old has been battling his illness since infancy. He’s not only survived a challenging medical condition, but apprehended the Riddler and chased the Penguin out of town. This may sound laughable, but some people barely want to get out of bed for their jobs everyday. This should motivate you to not only count your blessings but step up your game, both personally and professionally.

2. Make the ask. Expect big. Get big. According to reports, one email requesting help with granting Miles’ wish went viral, prompting more than 11,000 volunteers to support, providing their acting, staging and other skills to turn the city into Gotham. Some of the greatest movements have happened simply as a result of one small gesture or ask. It takes a great leader to recognize the power of one small step or effort, building on that to see a vision come to fruition.

3. Social is the name, master and ruler of the game. I truly knew nothing about this until I saw the hashtag on Twitter. You’d be surprised—or not— to find that many companies and professionals still have a hard time seeing the value of utilizing social media. In just minutes, the story of Batkid has gone global via the Web. Imagine how many nonprofits, companies and professionals are paying attention and joining the conversation. Imagine how this has not only helped build more interest and awareness about children and cancer, but boosted the exposure of the Make-A-Wish Foundation as well as the Bay Area. Need I say more?

What are your thoughts on the Batkid phenomenon? Soundoff and follow me on Twitter @JPHazelwood (and be sure to use #SFBatkid to join the conversation.)