Wearing what appears to be the $28 Nike Pro Combat Core Fitted men’s shirt, a sweatband with the King James logo, and a pair of sunglasses with the word “Champsâ€ across the lenses, LeBron James covers ESPN the Magazine’s NBA Preview issue this week.

Inside, James, fresh off a summer in which he won his second NBA title and married longtime girlfriend Savannah Brinson (the interview took place before the wedding), talks to ESPN’s Chris Broussard, who also has Ohio ties; he attended Oberlin College and worked for the Akron-Beacon Journal before moving on to the New York Times.

Broussard asked James if he wishes he had more of a relationship with his idol, Michael Jordan.

For his part, James, apparently reluctantly, answered the question honestly.

“You know, he’s somebody who I looked up to, and I’ve never had a conversation with him about the game,â€ James said. “I would love to sit down with him and just know exactly what he was going through and know what was his mind frame throughout all his special years. Throughout his pains — you know, not being able to get past Detroit, then overcoming Detroit. Or asking him, “Why did you retire? What made you come back? What made you come back again?” You know, everything that we all think we know. Just kind of having a sit-down conversation. 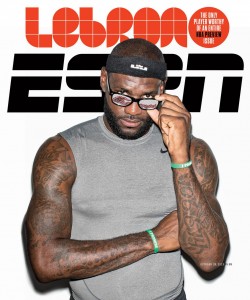 James said that he could rely on another superstar friend for advice for some of the struggles in his life.

“No, there’s nobody I really talk to about it. I know if I needed to talk to Jay Z about it, I could, for sure,â€ he said. “Him coming from the same background — inner city, no way out — and making it. Everyone believes you should be a savior here, and you have to balance that. That’s the theme of the show we’re doing, Survivor’s Remorse. I don’t want to say I’ve done it on my own, because I haven’t done it on my own. I’ve had the support of my friends and family. But I’ve never really talked to anybody about it, about my road to success. Hopefully, I can stay here. I ain’t trying to leave where I’m at.â€

Read the interview at ESPN.