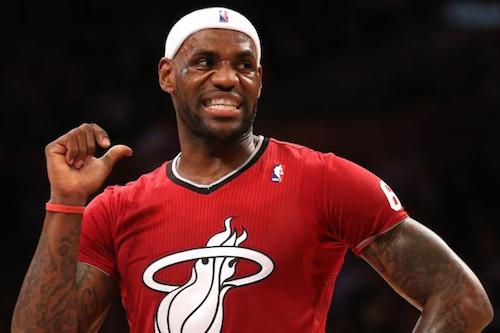 “In the next 15 or 20 years, I hope I’ll be the richest man in the world. That’s one of my goals. I want to be a billionaire. I want to get to a position where generation on generation don’t have to worry about nothing. I don’t want family members from my kids to my son’s kids to never have to worry. And I can’t do that now just playing basketball.”

That was a quote from an AP interview with LeBron James about a decade ago. Now that the best baller on the planet is confronted with another big decision, it’s time to revisit that quote and James’ path to the billionaire boys club.

Becoming a billionaire is rare air, rarer than the air above the rim when James elevates for one of his thunderous dunks. So are James and his group of advisers up to the task? Remember, he made friends with Warren Buffett at an early age. There are a lot worse people to take financial advice from than the “Oracle of Omaha.”

According to Forbes, James has earned $450 million during his NBA career. He’ll likely make much more now that he is reportedly holding out for a maximum contract. James has never been the sole highest player on any of his teams although he is currently more deserving of a max contract than any other player in the league.

The man is also a walking, talking billboard for advertisers.

He’s earned about $126 million from his 11 years in basketball salaries alone. The rest of his money came from endorsements. Forbes estimates that total during this period at $326 million. Forbes also has him at $72.3 million in salary and endorsements over the past 12 months. He added agreements withÂ Coca-Cola, Cadbury, Schweppes/Bubblicious, and Upper Deck as a rookie.

Other endorsements include NIKE, Coca-Cola, McDonald’s, Samsung, Dunken Brands and Powerade. He also added deals with lawn mower maker Cub Cadet, and State Farm, Audemars Piguet. His investments in the Chinese internet service, Tencent, is just one of several financial commitments he has in Asia.

CNN values his deal with NIKE an estimated $20 million a year in endorsement income and royalties on his brand of sneakers.

His investments include a reported 10% stake in bike-maker Cannondale and a stake in high-end headphone maker Beats by Dre that reportedly paid him an estimated $30 million when the company was purchased by Apple for $3 billion earlier this year. Though that number is unconfirmed, it was reportedly his biggest equity payout. He has also been cashing royalty checks that have topped $1 million annually in recent years as the brand exploded.

James also has stakes in the Liverpool Football Club, the British soccer team that he bought into as part of a deal with the Fenway Sports Group. That Group is the majority owner of the Boston Red Sox and Roush Fenway Racing, a NASCAR team.

As much as James banked this year, he still trails Floyd “Money” Mayweather in the highest paid celebrity athlete standings.

This year he ranked third, behind Mayweather and soccer star Christiano Ronaldo.

But if he continues to win championships, he could likely surpass all other athletes as highest paid in the upcoming years.

Now here’s another quote from James, this one to Forbes, “Winning an NBA Championship is the ultimate goal and winning and succeeding in basketball drives all business.”

Makes sense for a kid from Akron, Ohio flirting heavily with a spot on “Billionaire’s Row.”