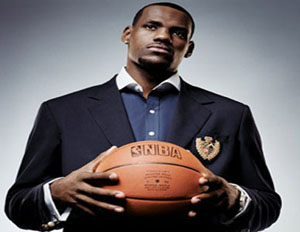 On Tuesday, the NBA superstar cut the ribbon to officially open The LeBron James Clubhouse at an Akron Boys & Girls Club, a safe haven for area children that he paid to renovate with $240,000 donated through his family foundation. Back home in Ohio and surrounded by family and friends, the Miami Heat forward felt humbled while giving back to his community.

“It’s unbelievable,â€ he said. “As a kid, this is one of the places we didn’t want to go. But to see the transformation from what this place used to be to what it is now is amazing, and the only reason we’re doing it is for these kids. They are our future.â€

The Federal Reserve said Tuesday that it would hold short-term interest rates near zero through mid-2013 to support the faltering economy, but it announced no new measures to further reduce longterm interest rates or otherwise stimulate renewed growth.

Small businesses don’t seem to be swept up in the social media revolution, according to a new study.

Hiscox, a small business insurance provider, polled 304 decision makers for U.S. businesses with between one and 249 employees in June. Of those polled, just 12% considered using social media a “mustâ€ for their business. However, 50% of respondents said they couldn’t do without word-of-mouth marketing. Just 4% said the same about social media marketing.

The city of London had received a great boost in popularity this year due to the intense media attention and international interest in the royal wedding of Prince William and Kate Middleton, but this week, the world is being reminded that there is another dimension to the pristine and cosmopolitan image of the region. Last Thursday, a 29-year-old Mark Duggan was shot and killed by police. Officers assert that he was armed and dangerous, but many are suspicious about what really happened that night. Days later, those suspicions, racial tension and economics have led to one of the worst riots and outbreaks of violence that London has experienced in over 25 years.