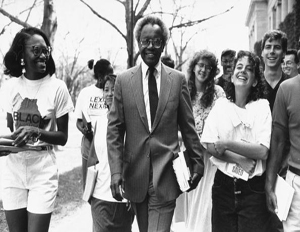 Professor Bell made a name for himself early on in his law career. He was recruited by late Supreme Court Justice Thurgood Marshall to join the NAACP Legal Defense Fund where he oversaw 300 school-desegregation cases. Â Bell went on to serve as deputy director of the Office for Civil Rights in the Department of Health, Education and Welfare, according to The HistoryMakers.

Known for standing firm in his beliefs, no matter what the consequences were, the Pittsburgh-native gave up a Harvard Law School professorship to protest the school’s unjust hiring practices and left the Civil Rights Division of the Justice Department after being told he would have to forgo his membership in the NAACP.

The pioneer of critical race theory penned Race, Racism and American Law (originally published in 1973) and Faces at the Bottom of the Well: The Permanence of Racism (1992). He released his memoir Ethical Ambition: Living a Life of Meaning and Worth in 2002.