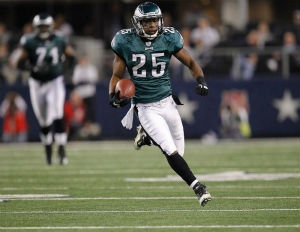 New Jersey State Police are investigating an incident along the New Jersey Turnpike in which a woman was left at a service area after she said she was riding on a party bus coming from a night club in NYC with a group of people that included Philadelphia Eagles running back LeSean McCoy, ESPN.com reports

According to TMZ, police sources say the woman claimed to be assaulted but “had no visible injuries when she met with cops on the night of the incident.”

Officers met with the woman at a rest stop near the Jersey Turnpike on December 19. She claimed to have had a physical altercation with a male on the party bus with 15 other women, but she never named LeSean McCoy as her attacker.

McCoy is being sued, however. The woman who calls herself “Mary Roe” in court documentsÂ  is seeking $50,000 for assault and battery, intentional infliction of emotional distress, false imprisonment and negligence.

Another Italian Soccer Match Stopped Due to Racist Fans