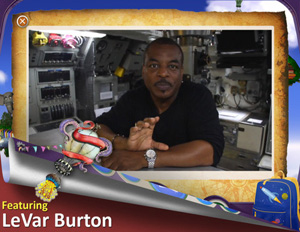 PBS’s Sesame Street has drawn a lot of attention this year from Mitt Romney‘s remarks about Big Bird and the scandal involving Kevin Clash, the voice of the beloved Elmo. But do you remember Reading Rainbow, another show on the network that helped children with literacy? The popular show starring LeVar Burton will be remixed and updated for a new generation of tech-savvy little readers.

Burton, who became popular after his portrayal of Kunta Kinte in the historic 1977 mini-series Roots, went on to act on Star Trek and PBS’s Reading Rainbow. The show was the third longest running children’s series in PBS history after going off the air in 2009.The show is making a comeback with Burton and his RRKidz team bringing the show back in the form of an iPad app.

While the app, which is targeted to readers between the ages of 3 and 9, is free, the subscription service is available for $9.99 a month or an introductory price of $29.99 for six months. Relive a bit of your childhood and watch the Reading Rainbow Remixed video below: