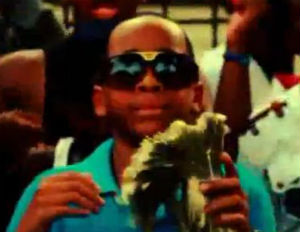 Ever since his music video “Get Smokedâ€ premiered on YouTube in early July, 13-year-old rapper Lil Mouse has been both highly sought after and heavily criticized.

The viral clip features the teen throwing up his middle finger, pantomiming a gun and flashing stacks of money. The song has been regarded as a prime example of the current state of the Chicago rap culture. This is a scene that births teenagers raised in rough neighborhoods who believe the only way to do better for themselves is rap about the violence that they encounter almost daily.

Similar to 17-year-old Chicago rapper Chief Keef, who recently signed a deal with Interscope, Lil Mouse is from Chicago’s South side and a product of its Roseland neighborhood. His debut song has more than 300,000 views on YouTube and was recently featured on Lil Wayne’s Dedication 4 mixtape. Soon after the release of the mixtape rumors began to emerge of Lil Mouse signing to Cash Money. Whether he signs to the label or not, he is certainly being courted by labels now.